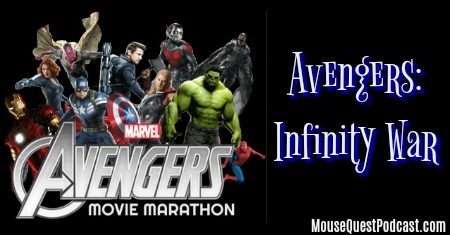 Avengers: Infinity War begins where Thor: Ragnarok left off. However, as the citizens of Asgard are trying to escape they are met with forces of Thanos trying to steal the Terract containing the space infinity stone from Loki. Thanos, who fashions himself as some kind of eco-warrior, is on a quest to gather all six of the infinity stones so he can “save” the universe from over-population and overuse of natural resources. However, to do that he and his soldiers must fight different teams of Avengers to gather the remaining five stones he needs to complete the set. Once the set is complete, he will have the powers of time, space, reality, power, mind and soul.

As with all Marvel Universe movies, nearly every scene is littered with humor such as Tony Stark/Iron Man updating Bruce Banner/ The Hulk on what has happened to the Avengers since Captain America: Civil War likening the rift among the Avengers to the Beatles breaking up. Also ramping up the humor factor is the inclusion of the Guardians of the Galaxy. This is especially true when Peter Quill/Starlord encounters Thor for the first time.

Again a Marvel movie give us a heaping helping of girl power. Characters such as Black Widow, Okoye, Gamora, Mantis, Nebula, Scarlet Witch and Shuri all prove they can kick a$$ both physically and mentally just as good as the guys. It’s nice to see women not talked down to in movies and given a rightful place at the center of the action.

Countering the abundance of humor are some very heavy scenes both emotionally and in battle. I would venture to say that this MCU installment is the darkest thus far especially among the Captain America and Avengers movies… even with the interspersed humor. During a majority of the movie, the crowd was laughing and clapping along. However, I have never seen a crowd walk out of a theatre after a Marvel movie like I did tonight: in near silence. This movie will effect you on an emotional level. (That’s your warning.) While I know the next Avengers installment (due out in May of 2019) isn’t supposed to be a direct sequel, I can only hope they can answer some of the lingering questions this installment leaves us with.

Avengers: Infinity War is rated PG-13. I would recommend you stick pretty close to that age recommendation. There are alot of very intense action scenes and an epic battle scene.

Movie is in theatres now!!! Get your tickets in advance here!

What would you do with the infinity stones if you had control over time, space, reality, power, mind and soul? Let us know your thoughts in the comments, on our Facebook page or on Twitter using the hastag #MarvelMovieMarathon.

Fans of the Marvel comic books know Steve Rogers quit being Captain America several times, each time returning as a different persona with a different look. Rogers’ look in Avengers: Infinity War appears to be a cross between his “Nomad” persona where he dressed in dark blue and his second time returning when he sported a scraggly beard and longer hair.