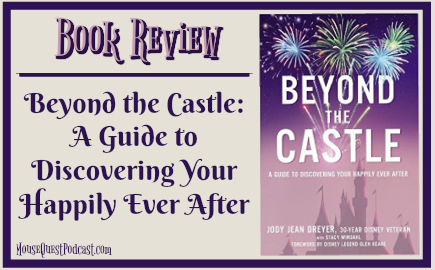 A Guide to Discovering Your Happily Ever After

Recently, I had the opportunity to review Beyond the Castle: A Guide to Discovering your Happily Ever After told through the observant eyes of Jody Jean Dreyer. Dreyer, a 30-year employee of The Walt Disney Company, held 22 positions during her extraordinary career. These positions ranged from parade performer all the way to Walt Disney World ambassador and Director of Corporate Synergy with so many diverse stops in between. During her tenure, she had the opportunity to have a front row seat to the inner workings of Disney and possesses the amazing capacity to relate her experiences to the lives and businesses of her readers.

Disclaimer: While I did receive a complimentary copy of this book for review, my thoughts and opinions are my own. This post also contains affiliate links which means if you purchase anything from the links provided, the MouseQuest could receive a small commission.

Beyond the Castle is a fantastic union of Disney history, self-help guide and a business manual. Dreyer uses her vast Disney knowledge to take some of the biggest moments in Disney history and relate the lessons she learned to guide the reader on a journey of self-discovery while also linking those lessons to best practices businesses can undertake to make their name and brand the best it can be.

Dreyer’s writing style was so conversational, so friendly and so relatable. While reading the book, I often felt like I was having a conversation with my best friend beside a roaring fire over a steaming cup of hot cocoa chatting about the lesson life has taught us.

Lessons Learned Beyond the Castle

Speaking of lessons, for Disney fans like myself there were so many takeaways in this book which I will hold with me the rest of my life.

It’s ok to be Tinker Bell as Long as you Make the Most of it.

One of the projects Dreyer worked on during her tenure at The Walt Disney Company was the promotion, really the definition, of the Disney Princesses. First, the group had a list of Disney characters who MIGHT qualify. Mulan, Cinderella, Snow White and Tinker Bell to name a few. Then the group set about defining the attributes of a princess. They listed things like royal by blood or marriage, had a transformative experience and possessed a signature look. Unfortunately, when all was hashed out, poor Tinker Bell just didn’t quite fit the bill. However, that doesn’t mean Tink isn’t awesome in her own right. I mean where would the saying, “Faith, Trust and Pixie Dust” be without our favorite pixie. The lesson here is that you don’t have to be a Princess to rock it. Be yourself and be the best of self you can be. Be Tinker Bell and fly!

It’s Not About the Destination, It’s About the Journey

Hitting the nail squarely on the head, Dreyer perfectly encapsulates one of my favorite mantas. (I MAY be one of those people who reads the last page of a book and wants to know the end of a movie before I see it.) For me it doesn’t destroy the experience at all. I love seeing how the characters get from Point A to Point B. Yes, the destination is a blast but the getting there, the joy of planning, even the bumps on the road… that’s where the fun lies.

The same is true when there is a view ‘behind the curtain’. Some might argue if the magic behind the scenes is exposed it takes away from it. For me that can’t be further from the truth. Take, for example, the feeling you get when you see Cinderella Castle from the end of Main Street, U. S. A. for the first time each trip. Even though you know they aren’t real bricks, no princesses really live there and the height is forced prospective, does it make it any less magical? Not in a million years!

“Afters are more satisfying if you pay attention to the Befores”

Oh boy! If this isn’t the key to planning the practically perfect Disney vacation, I don’t know what is. Truly, if you pay attention to the Befores (Advanced Dining Reservations, FastPass+ selections, Park Planning, etc.) then the Afters will be all that much more enjoyable. Imagine showing up at Disney without pre-planning… long lines, long waits to table service restaurants, grouchy kiddos, etc. That would be torture.

“If you feel the end is hopeless, it’s likely not the end, just another chapter”

So many people, when faced with adversity, think their life is at its lowest point possible. So much so that sadly, some even contemplate ending their lives. However, if we flip the script and focus on the fact that this is just another, likely short, chapter in a long life then maybe it won’t seem so bad.

“Don’t be disappointed when your journey pulls you through the castle door and out the other side, because the castle may not be your final destination but rather a gateway to greater adventure.”

Similar to the previous point, Dreyer explain how walking through Cinderella Castle is a beautiful metaphor for life. When walking up to the castle, you are mesmerized by the architecture, the mosaic artwork and the overall grandeur. However, this isn’t the end. As you proceed through the castle you come to the opening to the other side into Fantasyland. This transition is so relatable to the real world. How many times have you thought you had reached your final destination only to find out it was a minor pit stop along the way to something even greater?

It Really is a Small World, After All

Throughout the book, Dreyer mentions the farm her dad grew up on Indiana which is only about an hour from where I live. Recognizing her maiden name as the same as a fellow co-worker of mine who also farms in that area, on a whim, I emailed him to see if they were related. Low and behold, they were! They were first cousins and not only that, she happened to be in town riding out Hurricane Irma.

Not an hour after the email exchange with my co-worker I got a phone call from an unknown number. It was none other than Jody Jean “Carbiener” Dreyer! It was such a pleasant surprise! We set up a time to meet the next day where we spent almost an hour talking about our love of Disney. Jody is not just a wealth of Disney knowledge; she is bursting with Disney love. It is always so refreshing to talk Disney with someone who ‘gets it’. Especially someone who evokes the spirit and magic of Walt Disney as Jody does.

My advice for you is this, run out right now and grab a copy of Beyond the Castle and see if you can’t discover your own Happily Ever After. It will be well worth it to see what lies “beyond the castle” for you.

Beyond the Castle: A Guide to Discovering your Happily Ever After is now available in stores and online.