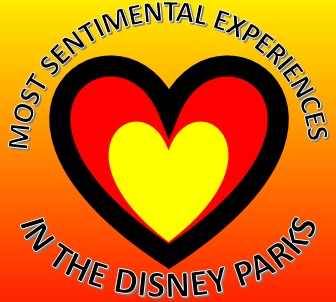 
A couple weeks ago we offered a collaborative post of the Best Website for Planning a Walt Disney World Vacation. It was so much fun gathering members the cast members of the MouseQuest around the virtual table that we decided to do it again. This time we are going to talk about our most sentimental attractions in the Disney Parks. These are the attractions you have to experience EVERY SINGLE TIME you are in the parks. As you will see, they mean something different to each of us for many different reasons such as, family memories, the legacy of Walt Disney, etc. Enjoy!

I remember going on the Haunted Mansion for the first time with my family on my first trip to Disney. I’ve always been a fan of the paranormal, so the fact that Disney could capture the feeling of a real haunted house was fascinating to me. The completely immersive experience is unlike any other in the park and is a true classic in my mind.

I remember riding Spaceship Earth this 1995 with my family–particularly my father, who was in the field of technology, so this ride was his way of having an “educational” experience while still being fun. I love how it starts at the beginning of human time and spans up to today. The use of atmospheric effects (like the burning of Rome and the soundtrack that changes with each scene) are unlike any other in the parks. I have been known to ride Spaceship Earth over and over, noticing something new every time I ride. I even remember the old exhibits at the end of the ride that were all about communications, which blew my 6-year-old mind.

I love the Peoplemover. Anthony and I ride it repeatedly each trip, even though it doesn’t particularly change. I love that it’s a link to Walt and the Wedway days. While I miss the old narration, I love how it begins with the diorama of Walt’s ideal city and whizzes around Tomorrowland. I love the top-down look at all of the people and attractions, and zipping through Space Mountain in the dark always gives a bit of a thrill!

BONUS ENTRY
Carousel of Progress
Once more, flashbacks to my childhood. I’ve always been a fan of the animatronics (as hokey as they may be these days), but it’s another connection to Walt and the beginning of Disneyland. I always loved the song and would walk around my house singing it for weeks after the end of a trip with my family. You can’t help but smile when hearing it!

I’ve been visiting Walt Disney World Resort since I was a little girl, back when it was only the Magic Kingdom. Naturally, Magic Kingdom is the park I’ve visited most often and is my favorite. It has a lot of nostalgia and holds a special place in my heart. It’s no surprise that my top 3 favorite rides that make me feel all the Disney feels are found in Magic Kingdom.

1. Peter Pan’s Flight has always been my favorite ride and the brand new interactive queue actually makes me want to wait in the stand-by line instead of using FastPass+. There are so many little details to see as the story of Peter Pan unfolds right before your eyes. Who hasn’t dreamt of being sprinkled with pixie dust and flying off to Never Land? As a teenager, I remember noticing for the first time that I wasn’t really flying high above the streets of London. As a child, I had no idea I was only a few feet off the ground. The magic was so real to me. I never want to grow up, so I choose to continue to believe in the magic and never miss a ride on Peter Pan’s Flight!
2. The Haunted Mansion brings me ghoulish delight, even at home. I have a sticker on my van stating ‘my other car is a doom buggy,’ I listen to Grim Grinning Ghosts on repeat and know every word of the Ghost Host’s script. The details and special effects are some of the best I’ve ever seen and I love the interactive queue. My favorite scene is the Grand Ballroom, where the ghosts have gathered for a swinging wake. I can’t help but visit the Haunted Mansion multiple times each trip!
3. Walt Disney’s Carousel of Progress is an attraction that many overlook, but not me! In fact, I never skip it. I find it fascinating to look back on the 20th century and listen to the history of progress. It reminds me of my grandparents and their story-telling. Knowing that this was Walt Disney’s personal creation gives it added sentimental value. It’s a perfect reminder that there’s a great big beautiful tomorrow, shining at the end of every day!

My three sentimental must do’s at Disneyland- I’ll try not to tear up as I write these down!

1. The first thing we do at Disneyland is wave to Walt’s window over the Fire Station. Then we board the fire engine and take a ride down Main Street, U.S.A. This is my most sentimental attraction at Disneyland because it’s spending time with the man himself. That vehicle is one Walt drove around Disneyland himself. I may be letting my Disney Nerd flag fly here, but I feel a small connection with Walt when we start off our day in this way.

2. After stopping at the Castle, we head to the second star on the right. Peter Pan’s Flight, one of the first attractions, calls our name. I love exiting the nursery window and soaring over London. It’s a well-done ride that shows off the magic of the story.

3. I never leave the park without a ride on the Disneyland railroad either. As you can guess: it’s because of Walt. This attraction will be going down for over a year thanks to the changes and additions going on in the parks and it’s one that I grieve for the most!

Here’s a list of my sentimental, top three favorite attractions at Walt Disney World Resort. While making this list; I realized ALL of my faves are located in Magic Kingdom Park, all three that is. I’ve listed them in order of the most beloved and the reason they’re special to me. My number one attraction Carousel of Progress might surprise a lot of you. It’s sentimental to my family because it was Walt Disney’s original idea from beginning to end; reminiscent of that era. It’s usually our last ride of the evening; we sometimes skip Wishes just to ride it, I know shocker. Number two is Big Thunder Mountain Railroad; it’s the only roller coaster at Walt Disney World that my hubby will ride, because he’s a fraidy cat. My family laughs out loud at the explosive drops and turns of the ride. We also enjoy the spectacular view of Tom Sawyer Island from the ride queue. Pirates of the Caribbean is number three and it never fails to disappoint. We always forget about the mini- drop and giggle when it happens; last but surely not least, I love pointing out the dirty, hairy, dangling, pirate foot to my family. Woot!

Honorable Mention, because I can’t ever follow directions on http://mqpodcast.com/ or the blog. My hubby’s favorite is Barnstormer, Starring The Great Goofini located in New Fantasyland. He rides it every visit. I’m sure, the cast members feel sorry for my 6’3”, two hundred and twenty pound husband, because they let him ride it consecutively; without getting off the ride. Always fun to see the little kids smirk when my hubby gets unstuck and off the ride.

Let’s be honest, every attraction can hold a special sentimental place in your Disney memories like how you have to yell “The Backside of Water” every time you ride Jungle Cruise and taking a quiet break from the busy parks to sit in the rocking chairs on Tom Sawyer’s Island watching the Liberty Belle float by as you talk about all the fun you have had so far and plan the rest of your day. However, for me there are three attractions which truly standout.

My first two sentimental favorites are completely based on the legacy of Walt Disney and his vision for the theme parks and philosophy. They are it’s a small world and Carousel of Progress. Both convey Walt’s message of optimism that we really do live in a small world where there’s a great big beautiful tomorrow shining at the end of every day.

My third sentimental favorite is Big Thunder Mountain Railroad. This was the first roller coaster my daughter attempted and quickly became her favorite ride. Big Thunder was a great stepping stone and gave her the courage to try some of the other headliner attractions such as Space Mountain and Splash Mountain. Prior to that Tomorrowland Transit Authority, Mad Hatter’s Tea Party, Prince Charming’s Royal Carousel and It’s a Small World were as far as she would go. Our little girl is growing up. *Insert sad eyes* 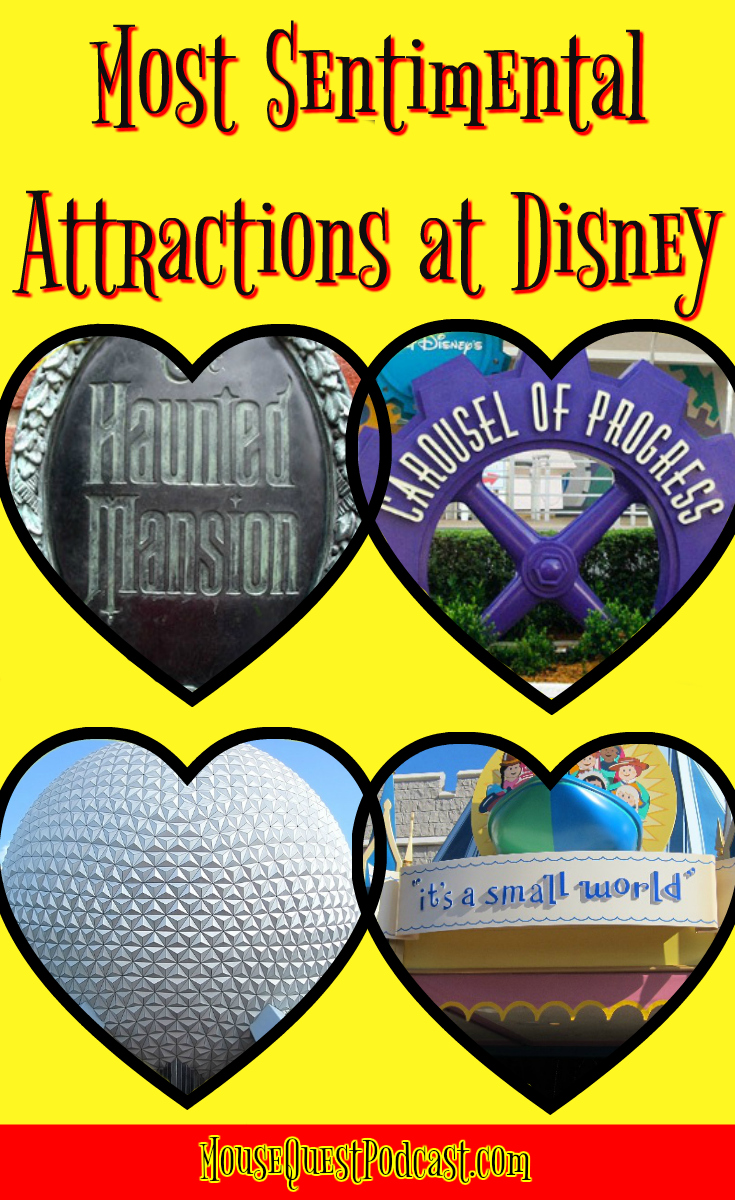