“Disney by Land, Disney by Sea” is a blog series where we discuss the pre-planning for a grand Disney Land/Sea adventure. Here are the previous issues:
Part 1 – Introduction
Part 2 – When to Go To Disney
Part 3 – The 180th Day Massacre
Part 4 – Cabin Switch, Paying for the trip & Online Check-in
Part 5 – Fish Extender Exchange & Port Cams

As I have mentioned before, after our 3-day Disney Cruise we are heading to Disney’s Wilderness Lodge for five days of fun in the theme parks. We have always wanted to stay at the Wilderness Lodge as it is one of the few resorts we haven’t had a chance to experience. For this trip we booked a standard woods view, bunk bed room. My daughter was ecstatic. She had already called the top bunk even though it’s just her this time, no friends tagging along.

That all changed a couple weeks ago I was at one of my daughter’s volleyball games and got a call from a (407) number. Anyone who knows anything about Disney knows that calls from a (407) area code can be extra magical. Unfortunately, given the fact that I would never have been able to hear the call I had to let it go to voicemail. Immediately after the voicemail was recorded I went to listen to it. It was a call from Guest Relations to inform me of refurbishments taking place at the Wilderness Lodge during my stay.

I can’t say this call was unexpected. I have known about the refurbishments to the Hidden Springs pool and Villas for months. I have even seen people online regale their stories of getting room upgrades, extra FastPass+ selections and even free theme park tickets being offered to offset the inconvenience of the construction.

When I called back the next day I got, what seemed to be, a prepared speech about the upcoming refurbishments and how they would be taking place during my stay then silence… Ok? So was I supposed to respond, “OK, thanks for the update?” Instead I said, “Well, that’s not very magical.” Joking… sort of. The Cast Member laughed and agreed. I then asked if there were any way to move to a different part of the resort to which she responded no. Then, employing my ‘Go Big or Go Home’ Disney planner attitude, I asked about switching to a different resort. Surprisingly, she responded, “Give me your top two choices and I will see what I can do.”

It goes without saying that Disney will do anything they can to make your stay as magical as possible. While I would have been delighted to stay at the Wilderness Lodge even with the refurbishments taking place, I truly appreciated that they went the extra step to give me the option of switching.

MICKEY’S VERY MERRY CHRISTMAS PARTY
When visiting Walt Disney World during the holidays one of my favorite things to do is Mickey’s Very Merry Christmas Party. I know… I know… I have heard all the naysayers complaining about the special holiday parties. “It’s too expensive.” “Why would I pay for just a couple of more character appearances?” “Some of the restaurants aren’t even open.” None of that matters to us. For us, it’s all about the merry feel of the Magic Kingdom with snow falling down on Main Street, U.S.A. and very low crowds. I mean seriously, how often can you show up in the Central Hub five minutes before Celebrate the Magic and have THIS VIEW?! Not only do you get this view, you aren’t standing elbow-to-elbow with your fellow park goers.

So the next argument might be, “Yes, but these are full day tickets not just for eight hours.” Wait… did I say eight hours?!?! Yes, I did indeed. What people often forget is that with your party ticket you can actually enter the park at 4:00pm, not the 7:00 p.m. time posted for the parties.

As I said before, one of the greatest selling points of the holiday parties for my family, beside the holiday merriment of course, is the low crowd levels. I can experience nearly the same amount of attractions in almost half the time and still have time to enjoy some free hot chocolate and snickerdoodles, see the special holiday parade without being there 45 minutes early to stake out a spot, and also see Celebrate the Magic and Holiday Wishes, also without any spot staking.

I did a little comparison of how much you can get done on one typical mid-crowd level day at the Magic Kingdom with a regular theme park ticket and three FastPass+ selections vs. arriving at 4:00pm with just a holiday party ticket (which you can also use to get three FastPass+ selections between 4:00pm and 7:00pm). This assumes on a regular day you are at the Magic Kingdom prior to park opening for a character meal so you are slightly ahead of the crowd at Rope Drop at 9:00am. It also assumes you won’t take a mid-day break. Conversely, it assumes you if you are attending the party that you aren’t going to wait in line to meet any of the headliner characters who are only out at the parties such as Santa Goofy and the Seven Dwarves. The special meet ‘n’ greets were never a real selling point for us anyway. 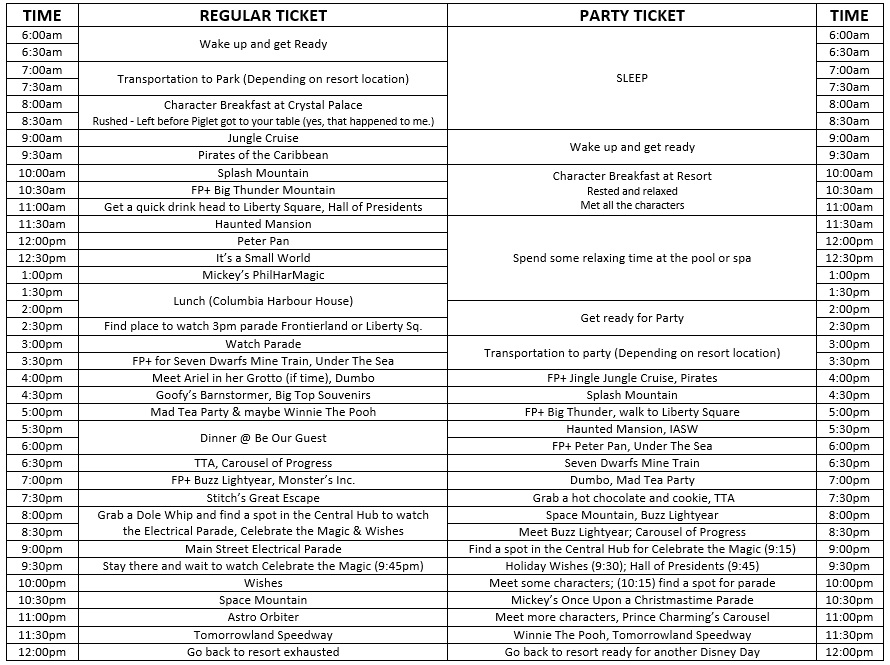 As you can see I can have nearly the same experience in that short eight hours as I can on a regular day. Not only am I possibly saving a few buck, I am also saving a day of my regular theme park tickets. But let’s be honest, if you are going to Walt Disney World for more than four days, you are likely going to visit the Magic Kingdom twice anyway. Therefore, all the things you might have missed at the parties, you can pick up when you visit again and make that a much more relaxing day.

That’s all for now. In my next post I will talk about how my family is counting down to the big day and a commentary on Advanced Dining Reservation scalping.