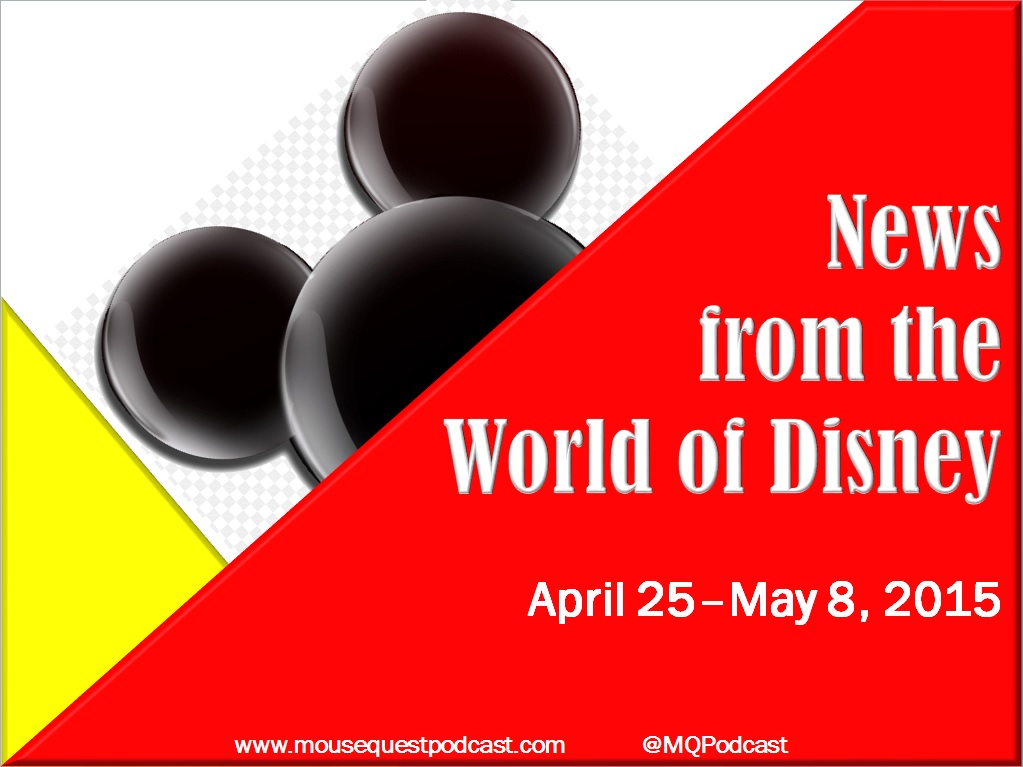 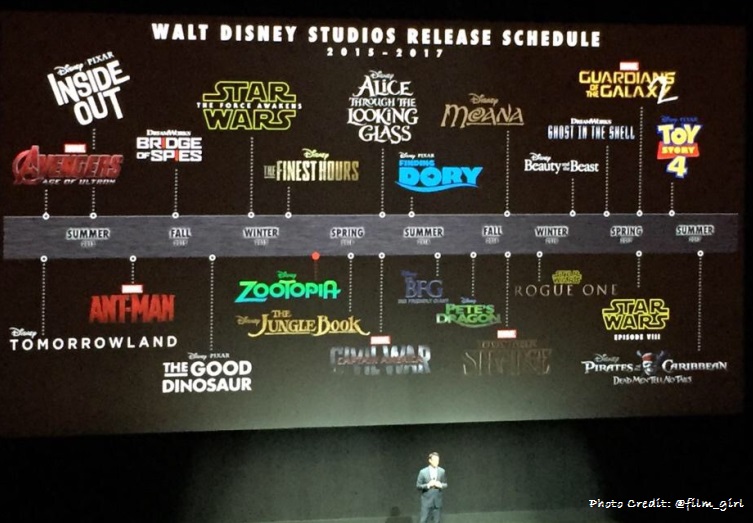 April 25 – Get your popcorn ready! Disney revealed its movie line up through the summer of 2017. No surprises really just a lot of fun movie viewing over the next 2+ years. (Link)

April 26 – The Walt Disney World Company is being sued by a California company, InCom Corp. InCom Corp. claims the attendance tracking feature of the MagicBand is technology it developed. (Link)

April 26 – The first quarter theme park injuries report was issued. Universal led the way with seven reported injuries while Walt Disney World was close behind with six. None of the injuries were life-threatening. (Link)

April 28 – Guests using Disney’s Disability Access Service (DAS) will now have their DAS information stored on their MagicBand. Guests not using MagicBands will still be able to use the program with the traditional cards. (Link) 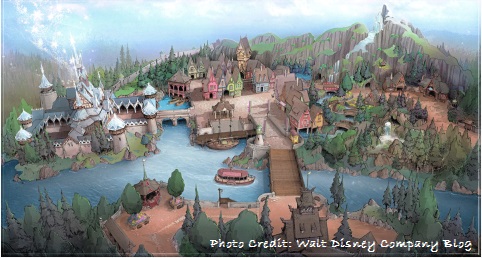 April 30 – Disney purchased the Carousel Inn & Suites for a $32 million. The Carousel Inn, located directly across Harbor Boulevard from Disneyland, has 131 rooms. Current management will continue to operate the hotel. (Link)

May 1 – You know a cruise line is top-notch when every single ship in their fleet makes USA Today’s Best Cruise Ships for Families Top 10 list. That is exactly what Disney Cruise Line did. Lead by the Disney Dream at #1, all four ships in the fleet, the Disney Fantasy #4, the Disney Magic #5 and the Disney Wonder #8, finished in the top 10. (Link)

May 1 – This summer Epcot will be offering a sneak peek of Disney-Pixar’s new original film “Inside Out”. Unlike other sneak peeks which just features clips from the movie, this special preview will offer special in-theatre effects and an exclusive introduction from the filmmakers. (Link) 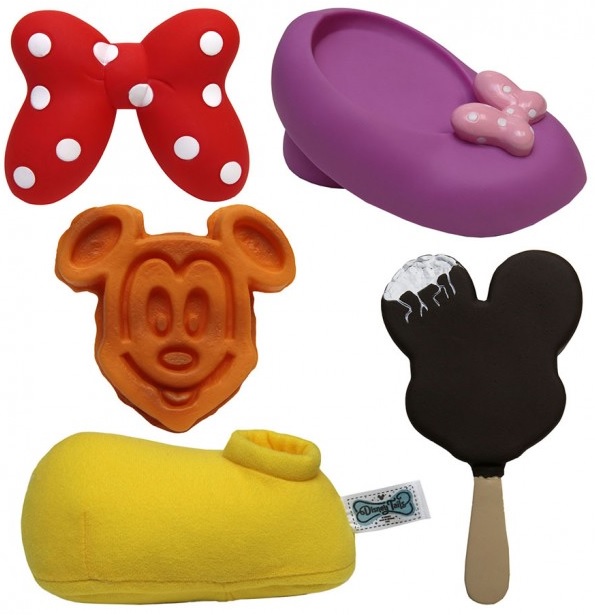 May 5 – The folks at Disney Merchandising have outdone themselves. They are now featuring a Disney Tails line of merchandise just for man’s best friend. From Mickey Bar squeak toys to personalized dogs to ‘Up’-inspired scarfs, there is Disney-inspired merchandise for even the most discerning canine. Disney Tails merchandise is currently available online and will be coming to select locations at Disneyland and Walt Disney World this spring. (Link)

May 3 – Would you be disappointed in a second place finish if you were only second to yourself? That’s what happened to ‘Avengers: Age of Ultron’ this weekend. The mega-hit raked in $191.3 million, a feat only bested by the original ‘The Avengers’ who brought in $207.4 million on its opening weekend. (Link)

May 5 – As if Star Wars Weekends are not amazing enough, now fans can enjoy some much needed rest and sustenance in the Rebel Hanger: A Star Wars Lounge Experience. The lounge will features light Star Wars-themed fare and drinks. I mean seriously, who could resist ‘The Dark Fried’ chicken and Darth Vader waffles served with maple syrup and sweet barbeque sauce. (Link)

May 5 – I don’t think it’s a highly guarded secret that The Walt Disney World Company makes some pretty good money and their second quarter earnings report supports that fact. The entertainment giant reported $2.1 billion in net income (income minus expenses) for the second quarter which ended on March 28, 2015. Their six month net income for 2015 is $4.29 billion. (Link)

May 5 – Pandora is no longer for teenagers. The music streaming site now has a channel called “Disney Aulani Sounds”. The music featured on this channel can be heard throughout Aulani, a Disney Resort & Spa. (Link)

May 6 – Attention Pin Trading Fans: The Disney Store Online Store just unveiled a Disney Park Pack – Trading Edition. This exclusive box of pins includes a limited edition pin that is only available in the Park Pack as well as two open edition pins which are not yet available in the parks. The new Park Packs will be released on the first Thursday of every month. (Link)

May 7 – D23: The Official Disney Fan Club announced a partial list of the presentations at the D23 EXPO 2015, August 14-16 in Disneyland. They include the Disney Legends Awards Ceremony hosted by CEO Bob Iger which will be held on August 14. This ceremony honors those individual who have made a significant contribution to the Disney legacy. Attendees will also get sneak peeks at upcoming Disney movies Zootopia, Finding Dory, Alice Through The Looking Glass and The Jungle Book. (Link)

May 7 – The shake-up in The Walt Disney World Company management following the naming of Tom Staggs as Chief Operating Officer continues with the newest announcement. Leslie Ferraro has been named President of Disney Consumer Product. Formerly, Ferraro served as Walt Disney Parks & Resorts Executive Vice President of Global Marketing, Sales and Travel Operations. (That’s a mouthful. I bet her new business cards will be much easier to read now.) (Link)

May 7 – 12 guests were rescued from Kali River Rapids in the Animal Kingdom by Reedy Creek Emergency Service after one of the ride vehicles became stuck due to ‘some sort of malfunction on the ride’. (Link) 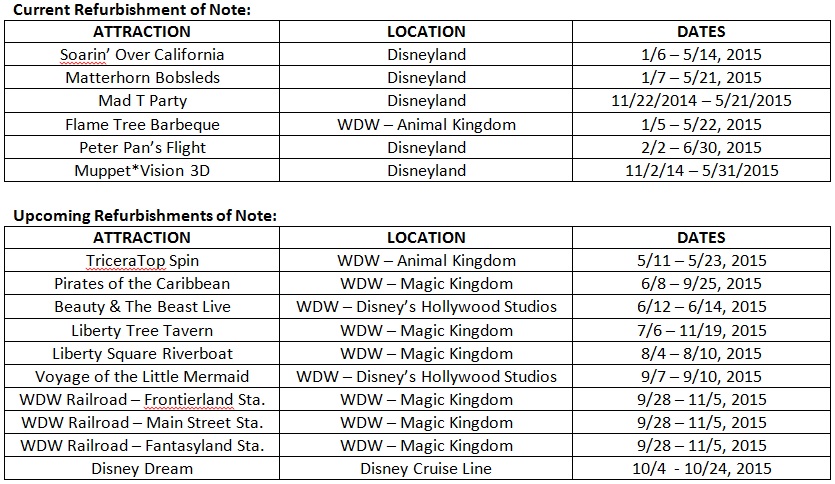