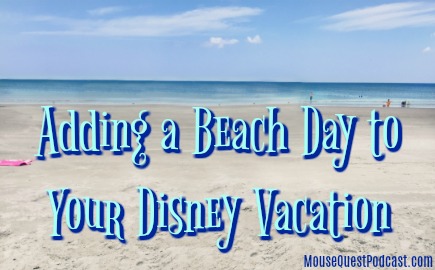 Don’t get me wrong, I LOVE being at Walt Disney World. The rides… the shows… the food… the fun… all at the tip of your fingers. However, sometimes a relaxing break from the parks is just what the doctor ordered. And nothing says relaxation like a lazy beach day.

When going to the beach from the Orlando area you have a choice to make: Atlantic Coast vs. Gulf Coast. Each has their own distinct advantages and disadvantages.

Other Things to Consider

When driving down the infamous Gulf Boulevard in Clearwater there seems to be a parking lot every 100 feet or so. The problem is that most of these lots can cost as much as $30 per day for parking and fill well before noon on busy days. However, a diamond in the rough on the Gulf Coast is Sand Key Park.

and Key Park is located just south of Clearwater Beach. The park features plenty of parking, shower facilities and lots of beach space for the bargain price of $5/day. On our beach day at Sand Key, we spent a lazy day catching some rays, searching for starfish and shells, walking up to the jetti and wading in the warm Gulf water.

One draw back of the Gulf coast came to light when the day we visited was VERY hot nearing 100°. Given the warmth of the Gulf waters this made it hard to cool off even when you were in the water. It was the epitome of the term ‘as warm as bath water’.

Besides the beach, the Tampa/Clearwater does offer some other fun destinations such as the Busch Gardens and Clearwater Marine Aquarium which is the home of Winter, the dolphin from A Dolphin’s Tale.

Any day which starts with a view of a Disney Cruise Line ship can’t be a bad day. As you are driving into Cocoa Beach on certain days you can catch a glimpse of the Disney Dream or Disney Fantasy as you make your way to the beach.

When visiting Cocoa Beach, we like to go to Lori Wilson Park  because the parking is plentiful, free and very close to the beach. The facilities at the park include restrooms, 2 pavilions, a nature boardwalk, a volleyball court, a playground, barbecue grills, and a dog park. They also offer chair and umbrella rentals. We spent our day at Cocoa Beach cooling off in the refreshing water of the Atlantic, body surfing and playing in the breakers.

The day we visited there was also a scheduled launch from Kennedy Space Center. Unfortunately, the launch was scrubbed for some reason but Cocoa Beach is definitely the perfect place to watch a launch.


Add Some Disney to Your Beach Day 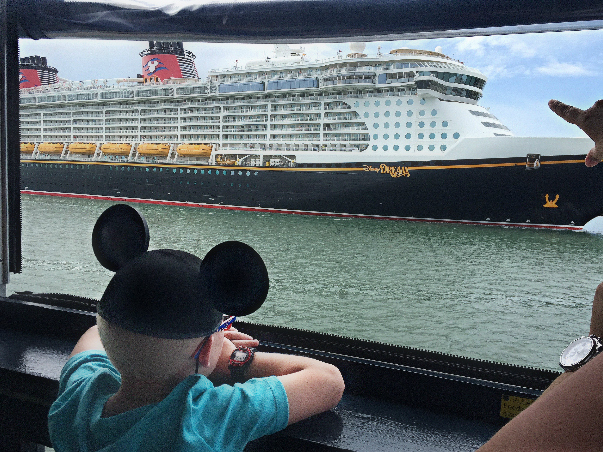 If you chose to add a beach day to your Disney vacation there is a way to get a little Disney back in your day. On Mondays, Fridays and Saturdays Disney Cruise Line ships come and go from Port Canaveral. The ships leave between 4:00pm and 5:30pm.

There are two places to watch the ships head off on their voyage. The first is right from your blanket at the beach. As the ships make the 90° turn south, they sail right by the beach. The second is from Fishlips Waterfront Bar & Grill. This restaurant is located on the causeway which leads to the Disney Cruise terminal. Not only do they have a waterfront spot to view the ships they also have a great menu of fresh fish dishes and traditional bar fare and the prices are extremely reasonable.

Another claim to fame of Fishlips is that it is the home of the Port Canaveral Webcam. Those who have read my Disney Waiting Dance post know this port cam is a fun way to keep the Disney magic alive when you are at home.

Getting to the Beach

Unfortunately, getting to the beach will require a rental car. Yes, you could order a private car service but the price would be astronomical. Luckily, there is a car rental location right on Disney property at the Car Care Center as well as at some of the Disney Springs area hotels and they will pick you up and drop you off. The cost of renting a car, depending on car size, will run about $30/day but it is well worth it.

Have you added a beach day to your Walt Disney World vacation? Did you head east or west? Both have their advantages and both are a relaxing way to spend any vacation day.