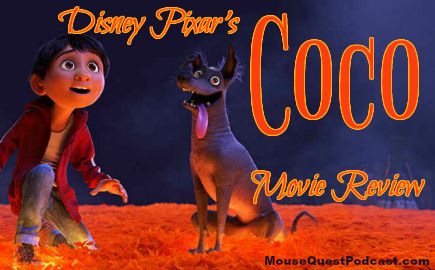 
MOVIE: Disney•Pixar’s Coco
RATING: PG
RUNNING LENGTH: 1 hr 49 min
MAIN CAST: Anthony Gonzalez (Miguel), Gael Garcia Bernal (Hector), Benjamin Bratt (Ernesto de la Cruz), Alanna UBach (Mama Imelda)
SYNOPSIS: Coco is the story of Miguel, a boy born into a family of shoe makers. Miguel’s family have forbidden music in their home because his great-grandfather abandoned the family to pursue a career in music leaving his great-grandmother and grandmother, Coco, all alone. Miguel, who has a deep love for music, goes on a journey to find his great-grandfather so he can convince his family to let him play. 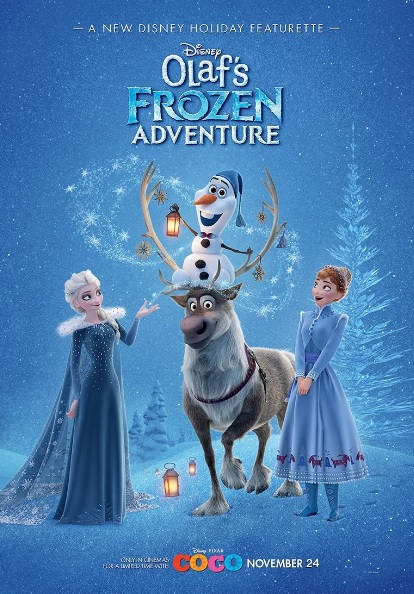 As with most Disney•Pixar movies, Coco starts off with short movie. Olaf’s Frozen Adventure features our favorite Norwegians from Frozen and takes place during the first Christmas after the sisters are reunited.

What begins with a joyous celebration ushering in the Christmas holidays quickly turns to sadness when Anna and Elsa realized they have no Christmas traditions… or at least none they remember. Therefore, Sven and Olaf set off on an adventure to find family traditions from the citizens of Arendelle which Anna and Elsa can incorporate as part of their celebration.

With Olaf and Sven nothing can be that easy. A series of misadventures leads them back to the castle with nothing to help Anna and Elsa with their celebration. However, when all is said and done it isn’t necessarily our physical traditions or the food we eat that make the holidays, it’s the fact that we get to spend it with the ones we love.

Olaf’s Frozen Adventure just made me look forward to Frozen 2 that much more. From the songs by Kristin and Robert Lopez to the characters I love so much to the incredible animation, 2019 can’t get here soon enough.

Over the years we have visited so many rich cultures such as China, the South Seas, Norway and Ireland through our favorite Disney movies, and now we get to experience a robust new culture in Coco. This newest Disney movie takes us to Mexico where we meet Miguel, an aspiring musician who is struggling with the fact that music is forbidden in his home.

After his family again shuts down his ambition to participate in a talent show, Miguel goes to the monument for de la Cruz which features a guitar he had seen in a picture at his family’s home. Turns out the guitar has magical powers to take him to the Land of the Dead where he encounters a wacky series of characters including family members who want him to return to the living and a musician named Hector who claims to know de la Cruz. Together, Miguel and Hector navigate the Land of the Dead to find de la Cruz. However, Hector has ulterior motives which turn Miguel’s world and the family he thought he knew upside down.

Coco, with its focus on the traditions of the Mexican culture is rich with color and music. There isn’t one scene in the movies where your eye isn’t drawn to the tapestry of color. I defy anyone who sees the movie to not be in awe of the cityscape in the Land of the Dead. And the music… seriously can the Lopez’s do any wrong? I think now. From their work on Frozen to Coco, their soundtracks add the perfect fit of storytelling and musicality to any movie.

Without giving away any spoilers, let’s talk about the end for a second. Whether by design or not, the beautiful ending of this movie will make viewers reflect on their own families, both those still living and those who have passed over, and brings to life the saying by Marcus Tillius Cicero, “The life of the dead is placed in the memory of the living.”

Now don’t let the PG rating scare you. While there are some tense moments as Miguel traverses the Land of the Dead, these moments are rare and usually tempered with some comic relief. I would definitely recommend this movie for all ages. It would be especially poignant to see this movie with multiple generations.

One thought on “Coco Movie Review”