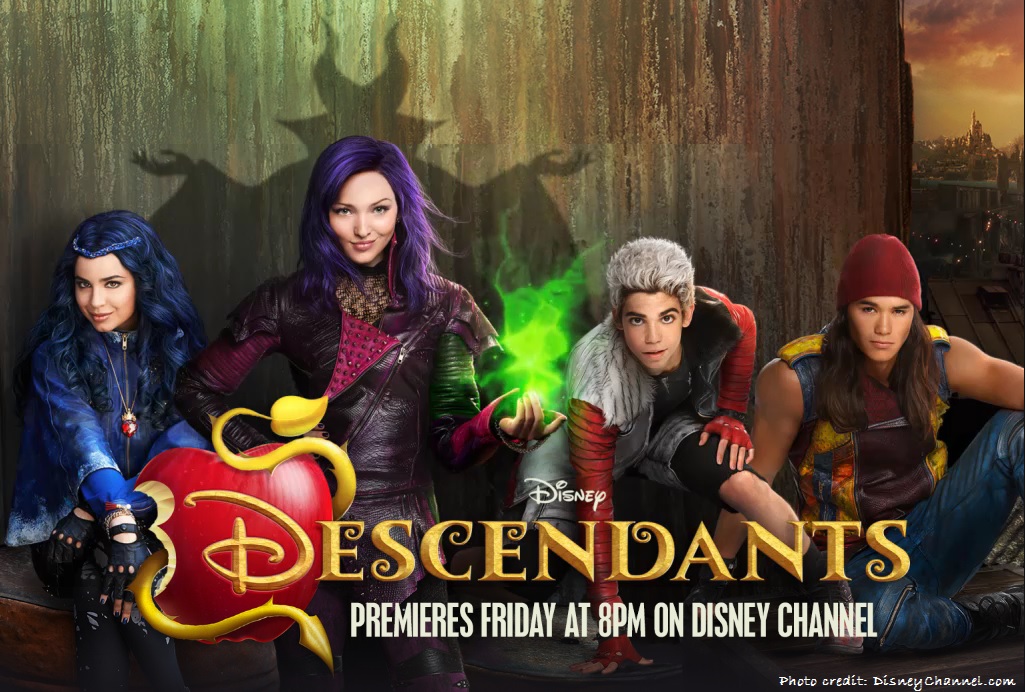 The newest Disney Channel original movie premiering Friday, July 31 at 8:00pm has big shoes to fill. Predecessors have included, among others, three super-successful High School Musicals, Halloweentown & Halloweentown High, Princess Protection Program, Jump In and Camp Rock. Does it live up to these high standards? Let’s find out.

Pictures if you will the wide-eye optimism of High School Musical combined with the revisionist story-telling of Once Upon a Time. That is exactly what you get with the new Disney Channel original movie The Descendants. The combination of well-produced musical numbers, stellar costumes, above-average effects and the furthering of the story of Disney’s most evil villains push this movie from what could have been a campy farce (Yes, I’m looking at you, Teen Beach Movie.) to a potential Disney classic.

The focus of the story is on Mal (daughter of Maleficent), Carlos (son of Cruella De Vil), Evie (daughter of the Evil Queen) and Jay (son of Jafar) who have reluctantly agreed to attend a posh prep school in Auradon. Current attendees of the school include Doug (son of Dopey), Jane (daughter of Fairy Godmother who is also the Head Mistress of the school), Ben (son of Belle & King Adam), Audrey (daughter of Aurora), Chad (son of Prince Charming & Cinderella) and Lonni (daughter of Mulan).

Prior to leaving for their new school, Maleficent gives them all a mission: find the Fairy Godmother’s magic wand. With the wand, she, and the other villains, can break the spell which confines them to the Isle of the Lost and allow them to rule the world. The villains’ children devise a plan to capture the wand but in the meantime they learn that they each are much more than their lineage. Ben puts it best while talking to Mal when he says, “We are not automatically like them. We get to choose who we are going to be.”

This musical follows the High School Musical formula of large, full cast production numbers interspersed with heartfelt ballads. What I really like about Kenny Ortega-directed musicals is how the music seamlessly fits into the story. We have all seen those musicals which songs pop out of thin air and make no sense to the storyline. The musical numbers in this movie serve to enhance the storyline and convey the emotion of the scene. The songs which stand out in this feature are “Evil Like Me” by Maleficent (Tony-winner Kristin Chenoweth – Honestly, can she do anything wrong?), a quaint cast performance of a “Be Our Guest” remake and “If Only”, a lovelorn ballad performed by Mal (Dove Cameron).

The culmination of the story takes place at Ben’s coronation where the plot to steal the magic wand is set to unfold. It is here the villains’ children are forced to make the final decision. Will they follow in their parent’s ways or step out from that evil shadow? Can Mal reconcile herself to the fact that she might not be as evil as she was raised to be? Does Jay really believe Jafar’s mantra of ‘There is no team in I’? Will Evie realize she is more than just the beautiful image in a Magic Mirror? Can Carlos overcome his fear of dogs? 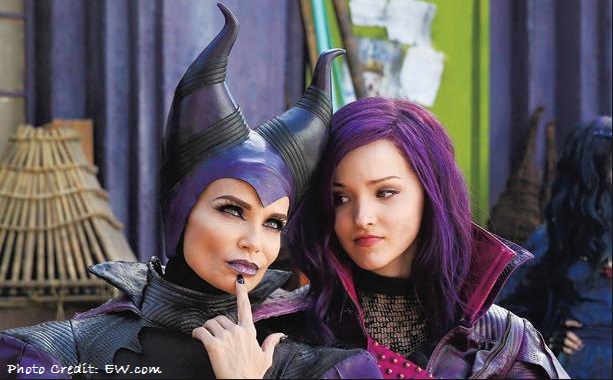 There are two standout performances in this feature. The first, which should be no surprise to anyone, is the scene-stealing performance of Chenoweth as Maleficent. Like I said before, can she do anything wrong? I doubt it. Aside from brilliantly acting the tension between mother and daughter, she delivers some of the best one-liners in the movie. The next performance which deserves special recognition is that of Dove Cameron as Mal. Whether holding her own with powerhouse Chenoweth or coming to terms with her goodness, she play her part with both vulnerability while at the same time commanding each scene she is in.

I highly recommend this movie for fans of Disney’s classics as well as the teens and tweens in your family. Lucky for us the movie will be played hundreds of times over the next few weeks on the Disney Channel. Make sure to catch it at least once… or ten times.

21 thoughts on “Disney Channel’s new movie The Descendants: High School Musical Meets Once Upon a Time”