Let me set the scene for you: We are sitting in the Orlando International Airport (MCO). The crowd is bustling around as we sit dejectedly wait for our flight after another magical vacation in Walt Disney World.

DD: I wish we didn’t have to leave.
Me: You have finals, Sweetie. Plus we have to go get the dog from the kennel.
DD: I know. (insert frown)
DH: We’ll be back.
DD: (Looks excitedly at DH) Really? When?
DH: Ah… (looks as me nervously for agreement) Maybe next year?
Me: (In 2.6 seconds flat I begin planning a killer Disney vacation with all the accoutrements.)

And so it begins. Time to start planning our next Disney vacation… so many choices, so little vacation time. When should we go? Where should we stay? How are we going to get there? Where should we eat this time? Should we add a Disney Cruise… wait, what?! Hmmm… that sounds nice. Let’s go for it! There began our basis for planning “DISNEY BY LAND & DISNEY BY SEA”. 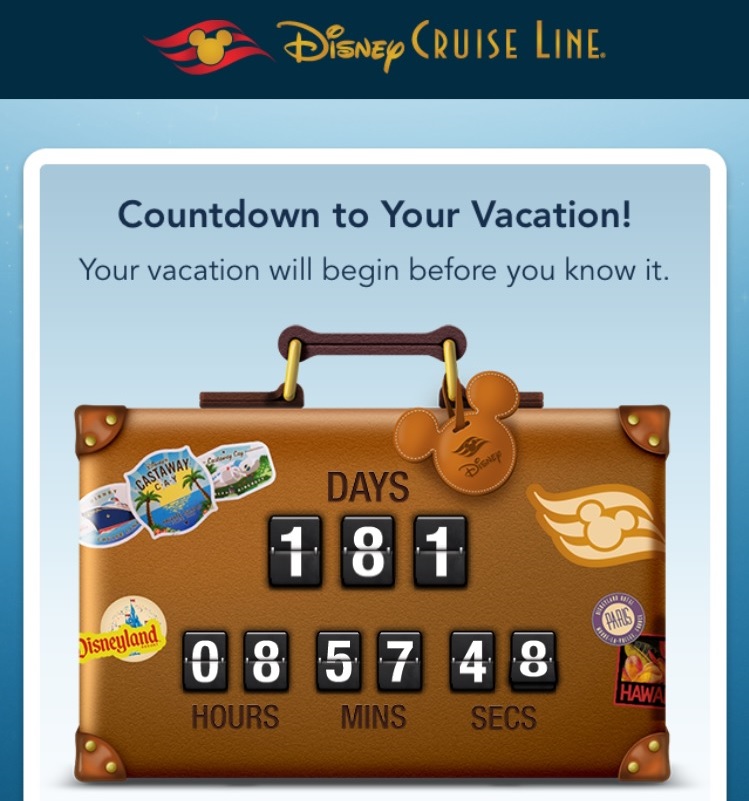 In the coming months, 181 days, 8 hours, 57 minutes and 48 second to be exact… not that I am counting, I am going to post my on-going trip report. However, instead of writing the report after we return, I am going to write it starting at the beginning of the planning process. I will post about all of the steps it will take to plan a magical (hopefully) Disney Cruise Line/Walt Disney World vacation.

To start in this post we will discuss the basics of our trip: who, what, when, where and how.

Family Bio:
Growing up in Maine, or “Vacationland” as it’s aptly named, my family typically didn’t stray too far from home considering we already lived in a bonafide vacation destination. However, we did take long weekends here and there for quick jaunts to Storyland, Santa’s Village and Six Gun City in New Hampshire or Sturbridge Village and Boston in Massachusetts. In 1986, my parents took my brother and I to Walt Disney World for the first time. Hubby, on the other hand, typically headed east from Indiana with his family for their vacations as a large part of their family lives in Boston. (No, we never crossed paths back then.) His Disney adventures started at Disneyland in the late 1970’s while visiting his aunt in California.

Since we got married we have been ten more times with trips #12 and #13 on the books for 2015. Our past trips have included two Grand Gatherings, one Land/Sea vacation and four trips to AAU Volleyball Nationals at Walt Disney World. The two trips scheduled for this year include another trip to Nationals and this trip I will be detailing over the next six months.

We indoctrinated our daughter into the world of Disney very early. Her first visit to Walt Disney World was at the age of 2 when we joined my family for a Grand Gathering during the week of Christmas 2001. Even prior to her first visit she was a huge fan of Disney, especially Snow White. There was no denying with her raven’s black hair and cherub cheeks that she did bear a striking resemblance to her favorite princess.

HOW:
Picking a ‘HOW’ is always a topic for discussion as we are experienced drivers. We have driven the 16-18 hours to Disney four times and plan to do so again for our trip to Nationals in June. This trip, however, falls during the school year (let the debate begin) so we need a quick mode of transportation. Therefore, we are planning on flying in early on November 13th and taking Disney transportation to port. A decision we will have to make in the near future is if we might actually want to come in the night before. This will get us to port earlier and allow us to make spa appointments earlier.

So that’s where we are right now. In upcoming posts I will discuss why we picked these dates, why we picked Disney’s Wilderness Lodge, booking our Disney Cruise, which stateroom we booked and why, choosing and making our Advanced Dining Reservations and FastPass+ selections, booking cruise excursions, options for paying for our vacation and packing as well as follow-up posts when we return.

I encourage everyone to please follow along as we traverse the trials and tribulations of planning “DISNEY BY LAND & DISNEY BY SEA”.

Disney’s Grand Floridian Resort & Spa – The Way Life Should Be

A Day in the Life of Disney’s FastPass+ Service

24 thoughts on “Disney by Land & Disney by Sea”