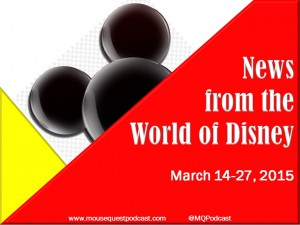 March 16 – Be Our Guest opened for breakfast starting on March 20. The Prix Fixe menu includes items which feature a French touch such as Eggs Florentine served in a puff pastry and Open-face Bacon & Poached Egg Sandwich with Brie. Most of the items on the menu cost $19.99. (Link)

March 16 – Not to be outdone on the cuteness scale by Walt Disney World’s Animal Kingdom, Disneyland got into the act of showing off their new crop of babies… baby goats that is. Say hello to Bernard and Bianca. (Link)

March 16 – Two more actors have been announced to join Emma Watson in the live action feature re-make of ‘Beauty & The Beast’. Emma Thompson will play the part of Mrs. Potts while Kevin Kline has been perfectly cast in the role of Belle’s eccentric father, Maurice. To top all this off Alan Menken, the creative genius behind the scores of ‘The Little Mermaid’, ‘Aladdin’ and ‘Pochanatas’, will return score the film as he did with the original. The film is currently scheduled to be released on March 17, 2017. (Link)

March 18 – The Walt Disney World Company released their 2014 Corporate Citizenship report which touted a 31% decrease in its net emissions from its 2012 level. Some of the initiatives which were implemented to contribute to this reduction included making ESPN’s annual ESPY Awards ceremony in Los Angeles virtually waste-free, food scraps from 60 food and beverage locations at Disneyland were sent to a local facility for processing into feed nutrients for farm animals and Walt Disney World has started using Harvest Power Orlando to convert more than 120,000 tons of organic waste annually into renewable biogas and natural fertilizers. This is just the beginning, by 2020 they plan to reduce emissions by 50%. (Link)

March 19 – The amazing story of little leaguer Mo’ne Davis who made history last year as the first girl to pitch a shutout in the Little League World Series is coming to the small screen. Disney, who has an incredible way of telling amazing sports stories, will bring this story to the Disney Channel. (Link) 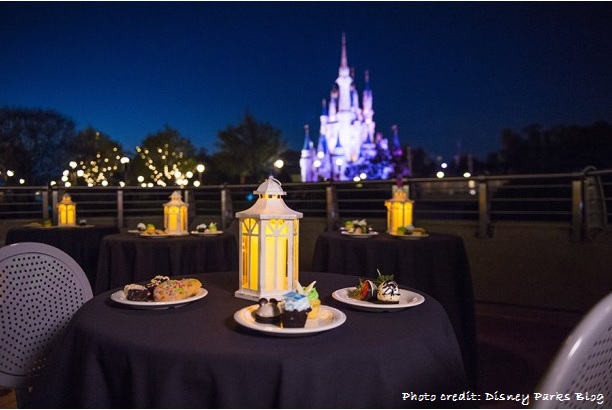 March 19 – The Tomorrowland Terrace Fireworks Dessert Party is changing to the Wishes Fireworks Dessert Party beginning on July 5, 2015. Reservations for this transformed event opened on March 20. So what is the difference you ask? The new party will offer a sparkling cider toast and the price will nearly double to $49/adult and $29/child plus tax. (Link)

March 19 – Pandora introduced a collection of Disney Princess Charms as part of their Spring 2015 Disney jewelry collection. The prices for these charms start at $35. (Link)

March 19 – I think every Disney fanatic’s dream house would be at Disney’s Golden Oaks and that’s just what Brook Lopez of the Brooklyn Nets is getting. He is building a $1.6mm home in the exclusive neighborhood which includes perks such as annual passes to Walt Disney World and free transportation to and from the park. Sign me up! (Link)

March 20 – The US Navy Blue Angels did a spine-tingling flyover of Cinderella Castle on their way to Melbourne, Florida for an air show. Can you say goose bumps?! (Link)

March 20 – Innoventions West in Epcot will be temporarily closing at the end of May 2015 to make way for a new experience. (Link)

March 21 – If you don’t have the money to build a palatial estate at Disney’s Golden Oaks like Brooklyn Net’s player Brook Lopez how about buying your own monorail? For the bargain price of $280,000, you can own your very own Mark IV Red Monorail. (Link)

March 23 – Rumors are abound that a new Jungle Cruise-themed restaurant called ‘Skipper’s Cantina’ will be coming to the Magic Kingdom’s Adventureland. The estimated open date is the end of 2015. (Link)

March 24 – As we look forward to Disneyland’s Diamond Celebration, the Disney Parks Blog took some time to look back 60 years to the construction of the park.

March 24 – Disney Cruise Line is headed to the British Isles. In 2016, the Disney Magic will depart from Dover, England and spend 12 days with stops in England, Scotland and Ireland as well as La Havre, France. (Link)

March 25 – SMS Audio, owned by rapper 50 Cent, has teamed with Walt Disney Parks & Resort to become the official headphone manufacturer of Walt Disney World and Disneyland as well as the Official Disney Fan Club. SMS Audio will also be the official sponsor of the Star Tours attraction in Disney’s Hollywood Studios as well as the Avengers Super Hero Half Marathon Weekend and Star Wars Half Marathon Weekend at Disneyland. (Link)

March 25 – Walt Disney World announced a special offer which saves Guests up to 30% on select Walt Disney World resort. To take advantage of this offer Guests must book between March 23 – June12, 2015 and their trip must take place between June 16 – August 27, 2015. (Link)

March 26 – Are you going to be in Walt Disney World or Disneyland in April? Are you looking forward to the new Disney movie “Tomorrowland”? If you said yes to both of those questions then I have great news for you. You will be able to catch some exclusive scenes with special ‘in-theatre effect’ from the movie at the Imagination Pavilion theatre in Epcot and the Tomorrowland theatre in Disneyland. (Link)

March 27 – runDisney races have become some of the most popular race events in the country, and soon to be the world when they head to Disneyland Paris. Here is a great video wrap-up of the recent Princess Half Marathon Weekend festivities.