Some say that there is nothing more magical than a Disney Parks vacation. What they don’t know is that the magic is taken to a whole new level once Disney takes their show to the high seas on a Disney cruise. Recently, our family embarked on our third Disney cruise. This time the Disney Magic took us on a 7 night sea adventure stopping in Key West, Grand Cayman, Cozumel and Castaway Cay, Disney’s private island. Our vacation was filled with fun and created life long memories. Here are some of our favorite moments. 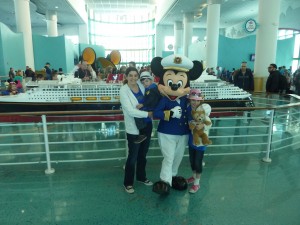 We flew in the night before and spend the night at Walt Disney World at the Dolphin Resort. On the morning of the cruise, we headed to Port Canaveral to board the ship. We made sure to get a picture taken with Captain Mickey before boarding. Once we boarded, we made sure to stop by Port Adventures to secure our Anna and Elsa and Princess Gathering tickets. After, we attended the Disney Vacation Club Members celebration complete with a character meet and greet, games and prizes. We enjoyed the sail away party on Deck 9 while the Magic pulled out of the port. By far, the highlight of our first day was dinner at Animator’s Palate. We were treated to a special show that included our servers and a very special guest. 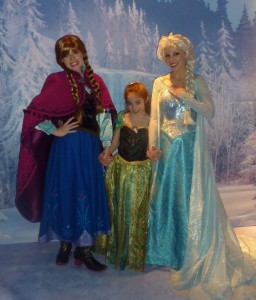 Our day began with a special character greeting with Anna and Elsa. After that, we walked around Key West, checking out some of the shops and making our way to the Southernmost Point for a photo op. We headed back to the ship early, but not before stopping for a treat: Chocolate-covered frozen Key Lime Pie on a stick. Back aboard the ship, we enjoyed dinner at Carioca’s, followed by a family Fiesta Dance Party in the D Lounge.

Day 3: At Sea
A day at sea is a great time to take advantage of all the ship has to offer. First up was the Princess Gathering in the Lobby. It was a beautiful day so we decided to spend the morning relaxing by the pool. Later, while the kids headed off to the club, we had some much needed adult time. We spent the afternoon going to the cooking class, “Anyone Can Cook” and taking a behind the scenes tour of the ship. That night was formal night. We were treated to the Captain’s Reception in the lobby atrium before dinner, and then dined at Lumiere’s. After dinner, our kids got to go to the Oceaneer’s Club while we enjoyed “Villains Tonight” in the Walt Disney Theater.

Day 4: Grand Cayman
We were up and at ‘em early as we were scheduled to go to Tiki Beach on Grand Cayman Island. After a short 10 minute drive we were enjoying white sand beaches, snorkeling and some much needed sunshine. Thankfully, our excursion was only for the morning as dark clouds began to roll in as we were leaving the beach. Unfortunately, that wasn’t all the bad news of the day. Our 3 year old son got sick on our way back to the ship. He was done for the day. As Dad and son hunkered down in the stateroom, my daughter and I got to spend some quality time together. When we arrived at dinner two people short, our wait staff was concerned. They went above and beyond to make sure the boys were well taken care of by sending soup and dinner to the stateroom. We really appreciated their kindness! 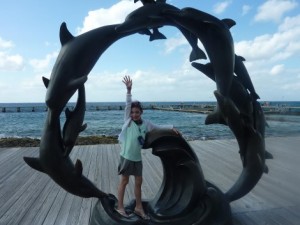 Rough seas and a sick son made for a difficult night as we pulled into Cozumel. We were scheduled for a noon excursion to the Chankanaab Adventure Beach Park Dolphin Encounter. The late start gave us the morning to rest. Our son’s stomach was feeling better, but he was still really tired. Many of the ocean-related excursions were being canceled due to “red flag” conditions. Our encounter was still on schedule, but we were warned that the high waves would make the experience difficult for kids. We opted to pull our son from the encounter so he could rest. The whole family was still able to go ashore, but only our daughter and her dad would get in the rough water to meet the dolphins. 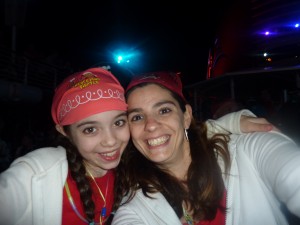 That evening was “Pirate Night” aboard the Magic. We donned some accessories to get into the spirit of the night. We met Pirate Mickey, Peter Pan, and a Swashbuckling Stitch on our way to dinner at Animator’s Palate, which displayed art from Pirate movies while we ate. After dinner we went up for the Pirate Party on deck, complete with fireworks! Feeling adventurous, we stormed the late-night buffet in Cabanas for a bit of dessert before calling it a night.
Day 6: At Sea
Another day at sea, more time to explore the ship. With cooler temperatures and high winds, we stayed inside most of the day. Our son was feeling much better. So much so that he woke up and insisted we go to Wake Up with Disney Junior. We spent the day meeting characters, souvenir shopping and checking out parts of the ship we’d been too busy to see yet. Our favorite moment was seeing the award winning “Disney Dreams” in the Walt Disney Theater. Unfortunately, the dark cloud that came in on our Grand Cayman day reared its ugly head that night and struck our daughter with the same stomach bug our son had earlier in the week. We hoped she wouldn’t be out of commission as the next day we were expected to arrive in Castaway Cay, a day the whole family was looking forward to. 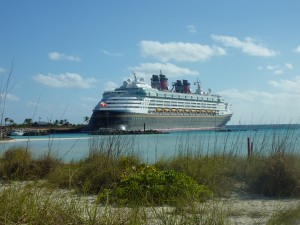 The sun was shining brightly as we pulled into the dock at Castaway Cay. Both James and I were scheduled to run the Castaway Cay 5K, but with our daughter still not feeling well, I went alone. It was great being in the first group itself. The race itself took us to beautiful parts of the island. A little while later, I was done with my race. With my medal around my neck, I headed back to the ship to check on the family. To my surprise, they were not there! Our daughter was feeling better so they went up to deck 4 to see the island. Hoping her good feelings would last; we quickly gathered our beach gear and made our way to Castaway Cay. It was a gorgeous day! It was nice to just relax and soak up the sun. James and our daughter managed to get in some snorkeling while I made sand castles with our son on the beach. Late afternoon, we boarded the Magic, sad that it was going to be our last night.

Day 8: Port Canaveral
We said goodbye to the Disney Magic and to new friends and cast members we had met on board. Despite the bumps in the road, we had a wonderful vacation. We created memories that will last a lifetime and can’t wait to do it all again someday!

Lisa is a Disney-loving wife, mom, teacher and wanna be party planner. She loves cooking, baking and spending time with her two children. In between Disney trips you can find her planning the next big party or blogging about her family’s Disney adventures on her website, Home is Where the Mouse Is.