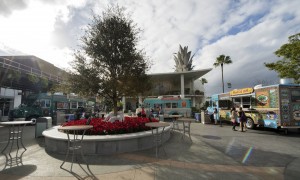 Who doesn’t love hearing about new food offerings at Walt Disney World? This is why I was so excited when, earlier this month, the Disney Parks Blog announced the opening of Exposition Park, which will be home to four Disney-owned food trucks. It sounds like there will be one or more of these trucks, plus the ESPN food truck, and also some visiting local food trucks, there at any given time. Exposition Park is located between Bongo’s Cuban Café and Starbucks on the West Side, near the grassy area overlooking the waterfront. The introduction of this new area is just the latest of many new concepts and entertainment options in the works for the new Disney Springs. 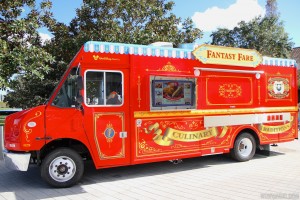 The four Disney-owned food trucks each have a theme that is loosely representative of the four theme parks in Walt Disney World. First, there is the Fantasy Fare food truck, which features favourites from Magic Kingdom theme parks around the world.

Many guests may remember seeing this truck parked outside the World of Disney store in the Marketplace. There are currently three entrees on the menu: Croque Monsieur, Sticky Chicken and Waffles, both from the Magic Kingdom in Walt Disney World, and the Hand-Dipped Corndog, which is a Disneyland Park favourite. I’ve tried and enjoyed the first 2 items and will try the corndog on our next trip!

The second food truck is called the World Showcase of Flavors, which features dishes from the Epcot International Food & Wine Festival.

Current menu items are: Pierogies with Kielbasa and Caramelized Onions from Poland, Grilled Chicken Breast Gyro from Greece, and Grass-Fed Beef Sliders from the Florida Locals booth. As expected, there are also four different wines available. They change this menu from time to time because I ordered the Lobster and Seafood Fisherman’s Pie from a food truck here last March. I have not tried any of the current items but they all sound yummy! 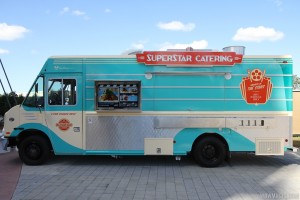 The three items for sale here are the Margarita Flatbread, Turkey Meatball Sub, and Slow-cooked Pot Roast Sandwich. These don’t particularly excite me, but the food here is probably my least favourite of the four parks, so this is not a huge surprise. Of the three menu items, I’d most want to try the pot roast sandwich. 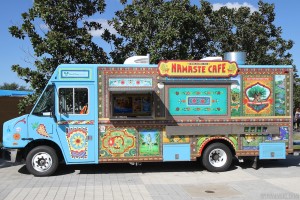 Reading this menu is making me hungry because I really love Indian food but don’t get to have it very often! There are four items on this menu: Butter Chicken, Tandoori Spiced Shrimp, Lamb Kefta, and Naan and Samosa Dipping Safari. 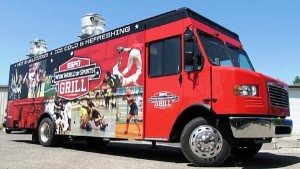 The ESPN food truck is most likely to be found over at Wide World of Sports, but we may get to see it at Downtown Disney occasionally. This truck offers such items as a Buffalo Chicken Sandwich, Angus Cheeseburger, Chi     cken Nuggets, Hotdogs, and a Bacon, Egg and Cheese Sandwich (for breakfast).

All in all, I am very excited to check out each of these unique and interesting food truck options. I think they will add another dining experience layer to the evolving Disney Springs area that is both current as well as very practical!

Corinne is a busy commuter mom who works full-time in downtown Toronto, Ontario, Canada. Together with her husband and teenage daughter, they love planning their future Disney trips and cruises, always trying to add new experiences to each vacation! You can follow Corinne on Twitter @Jump4Joy8390.