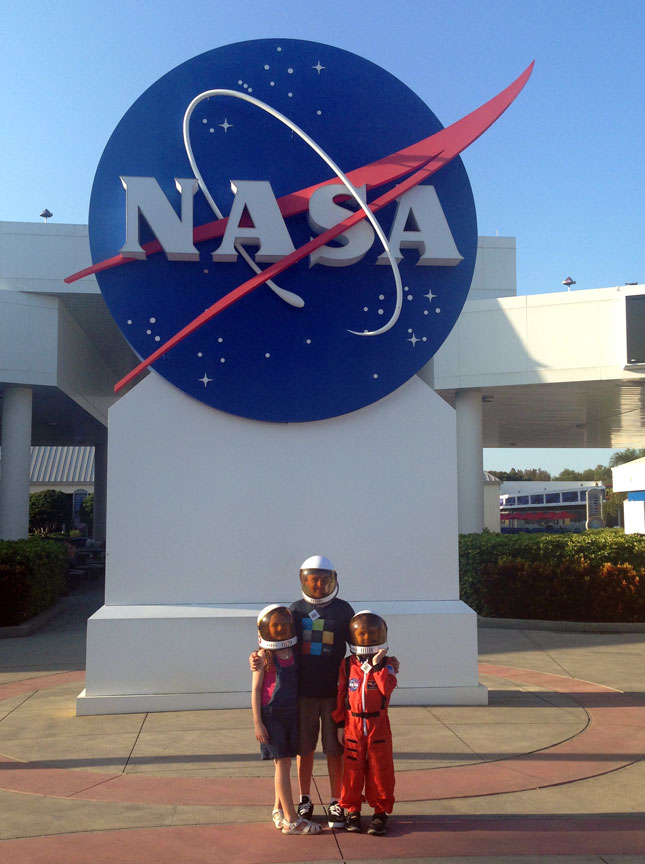 From the moment that Alan Shepard became the first American in travel into space, “Astronaut,” has become a dream occupation of every generation of children since. Sadly, very few grow up to realize that dream, but that doesn’t stop the rest of us from living vicariously through them and continuing to be spell-bound by the human drive to explore space.  Whether interested in this history of spaceflight, or eagerly anticipating the future, there are two locations in the United States that even the most casual space fans need to visit: Johnson Space Center in Houston, TX (aka Mission Control) and Kennedy Space Center in Florida.  One of these just happens to be within driving distance of the world’s most popular vacation destination- Walt Disney World.

Sadly, Kennedy Space Center Visitor Complex often gets overlooked in the increasingly crowded list of Orlando attractions.  The question commonly asked is whether it is worth it to take a day from Disney to travel the 75-90 minutes to the Visitor Complex.  During our most recent Disney trip, my family made the trip with the goal of answering that question.  Our travel party consisted of four adults (one huge space program fan (me), one moderate fan, two mildly interested people and three kids ages 11, 7, and 5).  Before answering that though, here are some semi-random thoughts about the experience in no particular order:

On the trip home, we did an informal survey of our party to identify everyone’s favorite part of the Visitor Complex.  Here are the results: 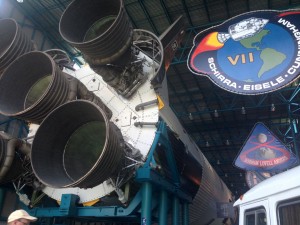 Grandpa- The Apollo / Saturn V Center.  One of the low-lights of the day was the KSC Bus Tour.  This 90+ minute ride takes you all over the complex providing through-window views of the various launch sites and the Vehicle Assembly Building.  The trip is too long, especially for kids, and can be made even longer by a bad tour guide / driver as we found out.  However, the one and only stop of the bus tour is the spectacular Apollo / Saturn V Center, the former launch control center for the Apollo moon missions.  The Apollo Center starts with a couple of theater presentations describing the program and climaxing in a re-creation of the Apollo 8 launch in the actual control room.  At this point guests are shown into the Saturn V area featuring a full-size Saturn V rocket turned on it’s side and running 363 feet along the main room.  Anyone visiting will certainly have renewed appreciation for the effort and engineering that went into the Apollo project.

Grandma- The Space Shuttle Atlantis exhibit.  KSC was selected as the retirement home for the Space Shuttle Atlantis, and they have gone all out to provide a good home for the vehicle.  The exhibit begins with a movie detailing the history of the shuttle program and then guests enter the main exhibit room.  Rather than just part the orbiter on the ground as many museums have done, KSC has suspended the vehicle in the air, opened the large cargo doors, and tilted the whole vehicle towards its side.  This creates the effect of the allowing guests to see angles of the orbiter that only astronauts have seen.  Surrounding the center-piece are many exhibits and interactive displays providing details of the Space Shuttle. 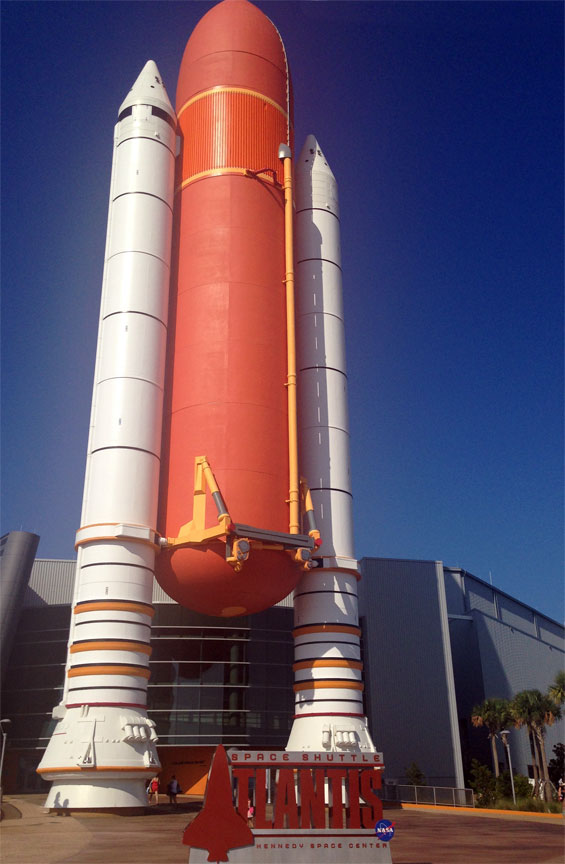 Mom- The IMAX movies.  The Visitor Complex has a large, stadium-style, IMAX theater on-site that rotates between two films and is included in the price of admission.  One tip we learned the hard way though- don’t sit near the front.  The screen is so large that it is really better to site near the back, and with the stadium seating, everyone is assured a good view.

Daughter, 7- The shops.  Seriously.  We have never seen so much space memorabilia and souvenirs collected in one place.  If it’s been made and is related to NASA or the space program in any way, you could find it in one of several shops scattered around the center.  Grandma excitedly bought all three kids astronaut costumes, complete with helmets and gloves.  Our 5-year-old wore his suit the entire day (despite 90+ F degree temperatures) and would have worn it to bed if he hadn’t fallen asleep on the way home.

Son, 5- Besides wearing his spacesuit all day, my son’s favorite activity was going up and down the large slide in the Atlantis Exhibit Hall.  The slide traversed two floors of the building and it took all our powers of negotiation to get him to leave.

Nephew, 11- Angry Birds Space Encounter.  The center has done a good job in using limited space to create a fun interactive area designed for kids.  There are a variety of Angry Birds themed games and activities, but by far the highlight for the kids was the Red Planet Laser Challenge.  The Laser Challenge is a cross between a maze and an obstacle course created with lasers.  The objective is to go as fast as you can to each of the four checkpoints while avoiding the many lasers in the room.  Each laser blocked added time to the final score.  In a nice switch, smaller kids actually had an easier time of this game since they didn’t have to go through as many contortions to avoid the lasers. 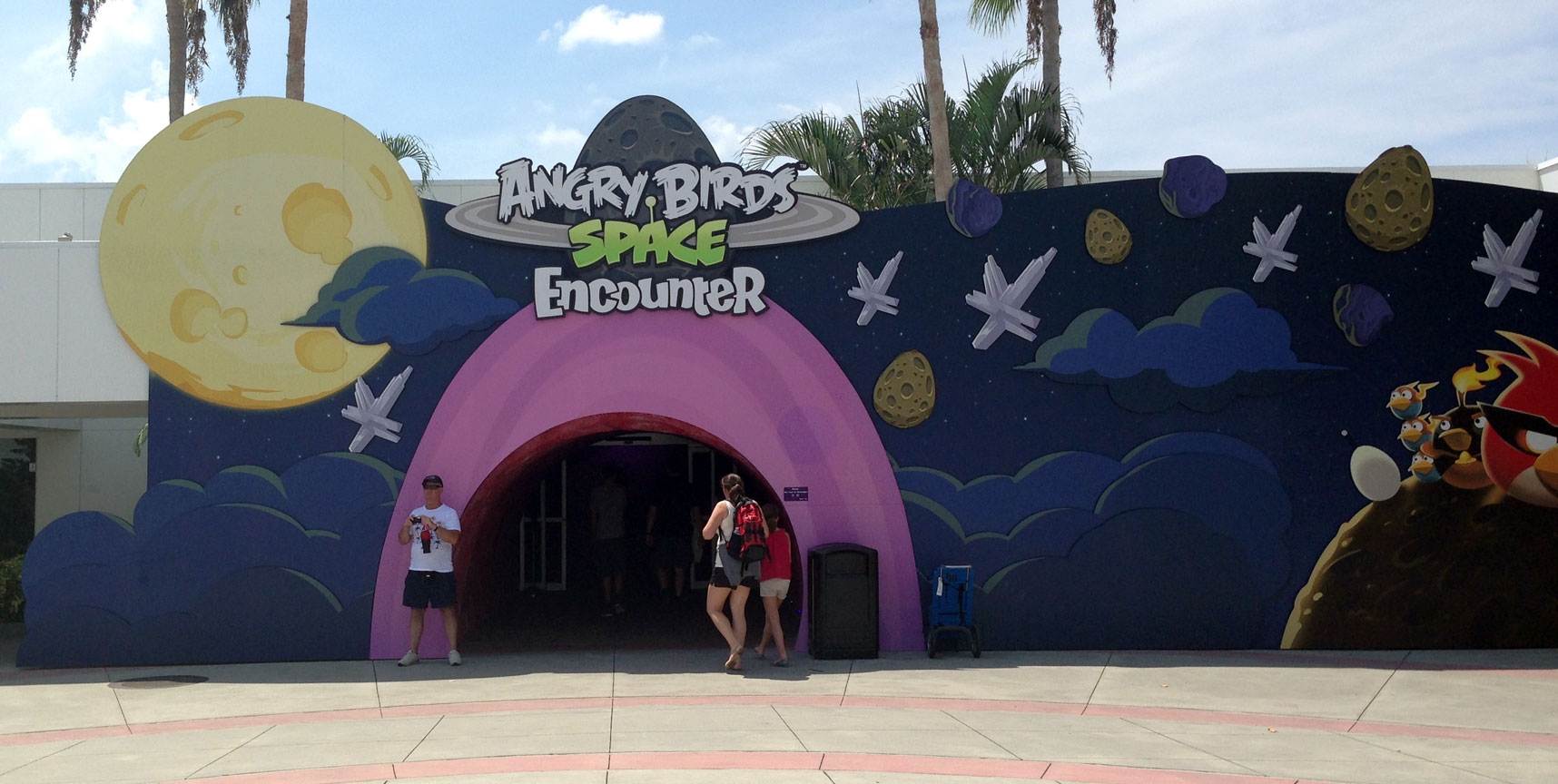 Dad (Me)- Rocket Garden.  The first thing we saw coming into KSC Visitor Complex is the last thing we actually did.  The Rocket Garden is a collection of Redstone, Atlas, and Titan rockets standing just inside the turnstile.  These are the rockets that launched the Mercury and Gemini missions leading up to the Apollo launches.  The area also has a few Mercury, Gemini, and Apollo capsules setup so the kids can climb in them as experience the small spaces that the astronauts operated in.  More than anything, this area provided a stunning up-close look at the surprisingly small rockets that started the journey to the moon.  We tend to think of rockets such as the massive space shuttle launch system or the behemoth Saturn V, but the rockets leading up to those marvels have a fragile quality that makes it even more impressive that people willingly climbed inside. 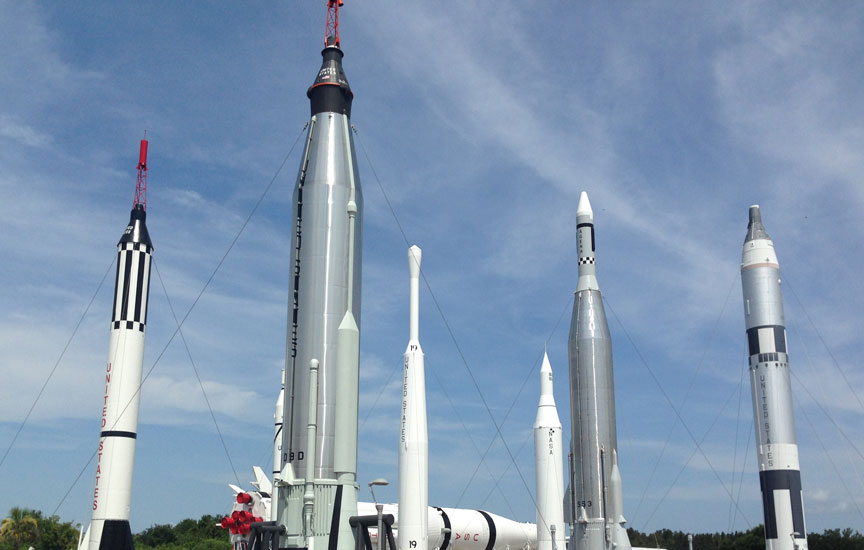 So, back to our initial question… Is it worth the trip?  100% yes!  For those that travel to Disney multiple times a year, perhaps not every visit, but every family should experience the Kennedy Space Center Visitor Complex at least once.  There are many things to enjoy for people of all ages and levels of interest in the space program.

The MouseQuest Podcast received complimentary admission for the purpose of writing this review as media. All of our thoughts and opinions are our own.