If you are reading this blog post, you probably love Disney. I certainly do! In fact, I love Disney so much, I’m actually willing to spend countless hours running and training just for another excuse to visit Walt Disney World. In 2013, I ran the 5th anniversary Disney Princess Half Marathon. It was such an amazing experience! I knew I needed to try more runDisney races.
That’s right, my love for Disney inspired me to run another runDisney race, but which one? While I have taken countless trips to Disney, I’ve never been able to visit in the fall. October brings many special events to Walt Disney World: Mickey’s Not So Scary Halloween Party, Epcot’s International Food and Wine Festival and The Twilight Zone Tower of Terror Ten-Miler (ToT). I knew this was the perfect opportunity to try some new experiences and run another race!

I convinced my husband and dad to take the plunge and run their first official races at Disney. I kept telling them how much fun they would have and what to expect. They had no idea what they were getting in to and they were impressed with what they experienced! My husband, ¾ of my kids (the oldest is away at OSU), my parents and I traveled to Walt Disney World to set off on our latest adventure.

The 3rd annual Twilight Zone Tower of Terror Ten-Miler was held on Saturday, October 4, 2014 at 10:00 p.m. I was actually very nervous about running 10 miles despite already running a half marathon. Mostly because the Princess half was held in nice, cool February and the Tower of Terror is held in hot, humid October. My training for the ToT was completely different than it was for the Princess. I spent 19 weeks following the Jeff Galloway training program, in the heat of the summer, to be as prepared as possible. It was so hard to push through those long, hot runs, but with a trip to Disney as my motivation, I did what I had to do. To my surprise, and delight, the weather at race time was absolutely perfect. Even though there were emailed warnings of expected torrential downpours, there wasn’t a single drop of rain. The temperature at race time was in the low 70s which was about as good as it gets. 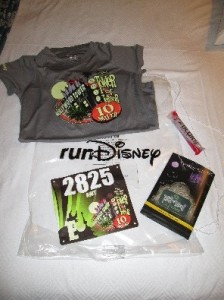 Part of the fun of running Disney is dressing up. The Tower of Terror 10-Miler is a villain-themed race but we decided to go with Toy Story costumes. I was Jessie, my husband was Buzz Lightyear and my dad was Woody. We were so cute! We took the bus from Port Orleans Riverside to the parking lot of Hollywood Studios. After leaving our bags at bag check, taking a few pictures and a last minute bathroom break, we sat down and just enjoyed people watching. I loved everyone’s costumes! There was a dance party going on with lots of upbeat music, but we decided to conserve our energy. After all, we had already spent the entire day at Animal Kingdom and we needed a breather.

We decided to move in to our corrals at about 9pm. I had submitted my time from the Princess and was assigned to corral E. I didn’t want to run without my hubby and dad, so I dropped back to corral G with them. It wasn’t long before we began the hike to the starting line. At exactly 10pm the first wave of fireworks were launched and the race was on. About ten minutes later it was our turn. Corral G fireworks exploded and we were off, careful to avoid the speed bumps just steps into the race, as we were reminded no less than twenty times! We immediately were transported into The Twilight Zone! 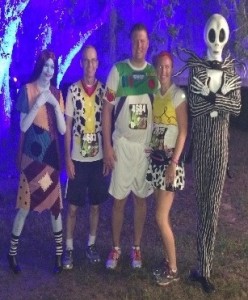 Ten miles goes by so fast when you are surrounded by on-course entertainment. There were all kinds of things to distract our minds. Villains, including Jafar, the Queen of Hearts, the hyenas from The Lion King, Captain Hook, Dr. Facillier, Jack Skellington and Sally were positioned at each mile. We only stopped for a picture with Jack and Sally, but I did get pictures of total strangers with each character. The grave diggers and zombies were amazing and I regret not waiting line for those photo ops. 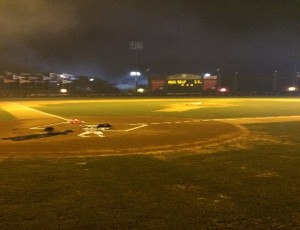 My husband’s favorite part was running around the warning track of the baseball field at the ESPN Wide World of Sports Complex. There was even a team of skeletons, complete with baseball gloves, in their positions on the field. I thought the trail run portion through the woods was awesome. Spiders, bugs and other creatures dangled from the moss covered trees, spooky music was playing, and a perfectly timed near-full moon shone down from above and cast eerie shadows through the fog. Wow! 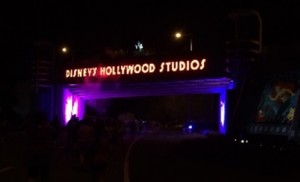 My dad got a kick out of Hades. He was positioned above the race course at the entrance to Hollywood Studios. Along with giant fireballs blasting into the air, Hades hurled wisecrack insults at runners as they passed under him. “Hey, you. You’re number 5,796. You didn’t win.” “Don’t you know this is a race? Start running!” He was quite an entertainer!

Unfortunately, I suffered a knee injury at mile 8 which slowed us down immensely. Darn exit ramps and their slanted inclines and declines! It was all I could do to push through the pain and tough out the last two miles. My husband and dad were great supporters and stuck with me, even though I had to walk a lot. The last mile seemed to stretch forever. Thank goodness we got to run on the Backlot and through Lights, Motors, Action to keep our minds occupied. Lots of cheerleaders lined Hollywood Studios, clapping and encouraging us to keep going. Finally, we reached the finish line, heard our names announced and received our hard earned medals!

After trekking what seemed like another ten miles, we reached the Indiana Jones Epic Stunt Spectacular stage to claim our bags. We then dragged ourselves over to the changing area and got in to our post-race clothes. We finally got to sit down at a table and chow on our yummy box of snacks that we were given at the end of the race. We were all pretty hungry and tired. Even though we were exhausted, I told my hubby and dad we had to ride at least a few rides before calling it a night. This was the Villain’s Hollywood Bash, after all! Our first stop was at Toy Story Midway Mania. The posted wait time was 50 minutes but it only took us about 20 minutes total. The night wouldn’t be complete without a ride on the namesake of the race, The Tower of Terror! My dad decided he’d had enough and kept our bags while my husband and I got in line. To my surprise, the wait time was posted at 10 minutes and the actual wait was less than that. Riding the Tower of Terror while sporting our super cute glow in the dark Hollywood Tower Hotel medals put a smile on my face. I felt so proud, excited and lucky to be in that very moment after planning for eight months and training for four of them. 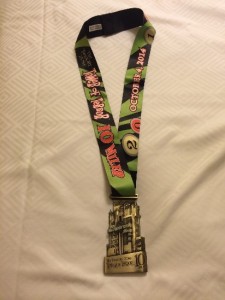 I already knew how magical a runDisney event was. My husband and dad quickly understood what I had been telling them. They both agreed the Tower of Terror Ten-Miler exceeded their expectations. Perhaps the only thing better than receiving my medal was hearing my hubby and dad tell me they want to come back and run Disney again. Mission, accomplished!

3 thoughts on “A Ten Mile Run Through the Twilight Zone”