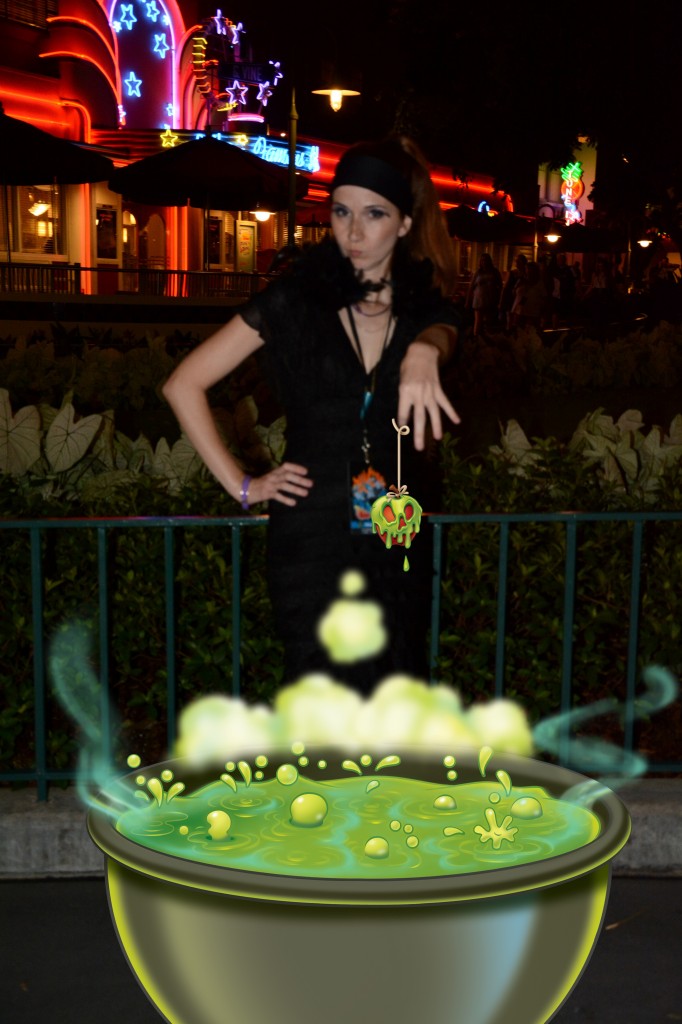 It’s date night. If you have kids, you know how it goes…you’ve finally secured a sitter, you’re extremely excited to be getting out of the house for some fun and adult conversation, but as giddy as you are you still feel a twinge of guilt as you drive away. August 23rd was our night. We had purchased tickets to the Villains: Unleashed event months earlier and had been looking forward to it for a while. I had searched for the perfect outfit and after two hours of primping, I was ready to go; Disney Bounding as Yzma. A hard-ticket event without the kids!! We hadn’t been to one since the Pirate and Princess Party was still going on and I had visions of low crowds, shaking hands with rare villains and wandering around with a Hades Hotdog in one hand and a Maleficent cupcake in the other. The disappointment that followed was quite a tough pill to swallow after feeling so excited for so long. The worst part was that the event could have been amazing if it had been handled differently. So, here are our thoughts…the Good, the Bad and the Ugly of Villains: Unleashed.

1. An abundance of evil: 50 Notorious Villains: Although we didn’t get to do any of the Meet & Greets, the amount and variety of villains was amazing. I couldn’t believe how many rare bad guys were around that night! I was super excited to see villains like Bowler Hat Guy, Constantine and Shan Yu. It’s a shame we didn’t get to meet any of them. 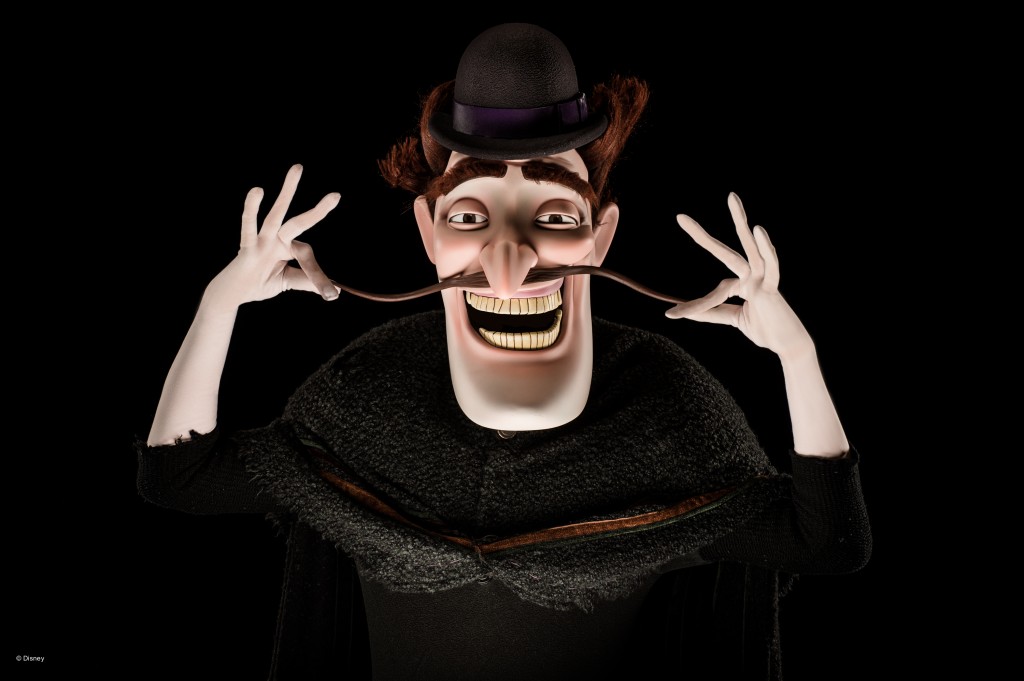 2. Oogie Boogie’s Freaky Funhouse Show:  This show was completely unexpected and very entertaining. I went in fully expecting a selection of villains to be singing and dancing to songs from their animated feature films. What we experienced was completely different. The show featured three extreme acts including sword swallowing, crossbow stunts and fire eating. I know this show has been one of the controversial topics of discussion surrounding the Villains event. For the record, I LOVED it. I thought it was perfect for a more adult oriented evening at the Studios. In the future, I’d love for Disney to do something like this again and just have an additional show that is more appropriate for children. 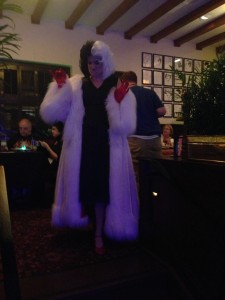 3. Club Evil: The only reason the entire evening wasn’t a total wash was Club Evil at the Hollywood Brown Derby. The entire venue was transformed into a villain themed speakeasy with specialty food, drink and live entertainment. The cabaret singer, “Torchella” was great, and I absolutely LOVED that she was singing Broadway tunes!! This was definitely the highlight of our date night. I really enjoyed the décor, the food and especially the wandering villains who came by. 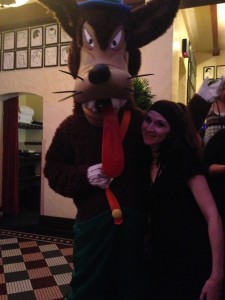 I was able to interact with some of them and even get a couple of photos! If Disney does another Villains event like this, I really hope Club Evil returns.

4. Villainy in the Sky Fireworks: When it comes to fireworks, I thought I had seen it all. This show was absolutely amazing. I literally stood there with my chin on the pavement because I couldn’t believe how incredible these fireworks were. Despite the high crowds, we were able to get a viewing spot near the American Idol Experience. Just awesome!!

1. Too Many People:  The event was oversold, no question. Crowds were massive and it was really difficult to maneuver around. Our family usually chooses to visit Walt Disney World during the off-season, because we don’t enjoy shoulder-to-shoulder crowds, and I certainly didn’t expect that at a hard ticket event.

2. Hours of Waiting: Large crowds mean long lines, but these lines were extremely long. Guests were waiting hours to meet villains. Lines for specialty drinks and food were very long as well. I waited almo 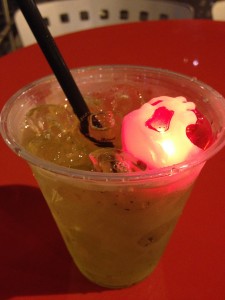 st an hour for one drink (it wasn’t worth it). When I visit a theme park during the summer, I expect to wait in line. When I pay almost as much as a full day park ticket for a 5-hour hard-ticket event I don’t expect higher crowds than during the day. The high wait times really prohibited us from doing things we wanted to do. Instead of waiting hours to meet two or three villains at the most, we chose to skip the Meet & Greets, open attractions and complimentary face painting in order to experience Club Evil and see the Oogie Boogie show. There was just no possible way to do even half of what was offered in the amount of time we had. A huge disappointment.

3. Specialty Item Shortage: We arrived right around 8:00pm, which was when the event officially began. Shortly afterward guests were complaining that the special event guides had already run out. Event merchandise and special foods soon followed: running out hours before the event was finished. I really don’t understand what went wrong here. Why not have at least enough for each person who purchased a ticket? Very frustrating, to say the least. 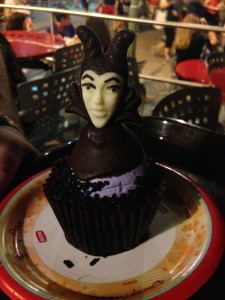 4. Early Meet & Greet Closures: Due to the high crowds and popularity of the rare villains, the Character Greeting Experiences had to be shut down very early on. Constantine was the first, with the line shutting down less than two hours into the event. Other villains quickly followed, leaving guests without even the option to wait for hours if they wanted to.

Angry guests. Apparently, we were not the only ones who were more than a little disappointed with this event. There were long lines throughout the night and the line for Guest Services was no exception. It was very evident that Disney recognized pretty quickly what a fiasco this was. Cast Members were offering complimentary tickets to any of the theme parks, Mickey’s Not So Scary Halloween Party and Mickey’s Very Merry Christmas Party without argument. Many guests also received straight refunds for their tickets in spite of Disney’s non-refundable ticket policy. I really have to give them credit for trying their best to rectify the situation in any way they could after they saw what a disaster this was.

In the end, our date night wasn’t what we hoped it would be. However, what we DID get to experience was amazing. I can only imagine how great this could have been if the event hadn’t been oversold. If the villains are unleashed again sometime in the future, I hope we get the opportunity to attend. I’m confident that Disney will fix what went wrong and present something new and better than we’d ever expect.