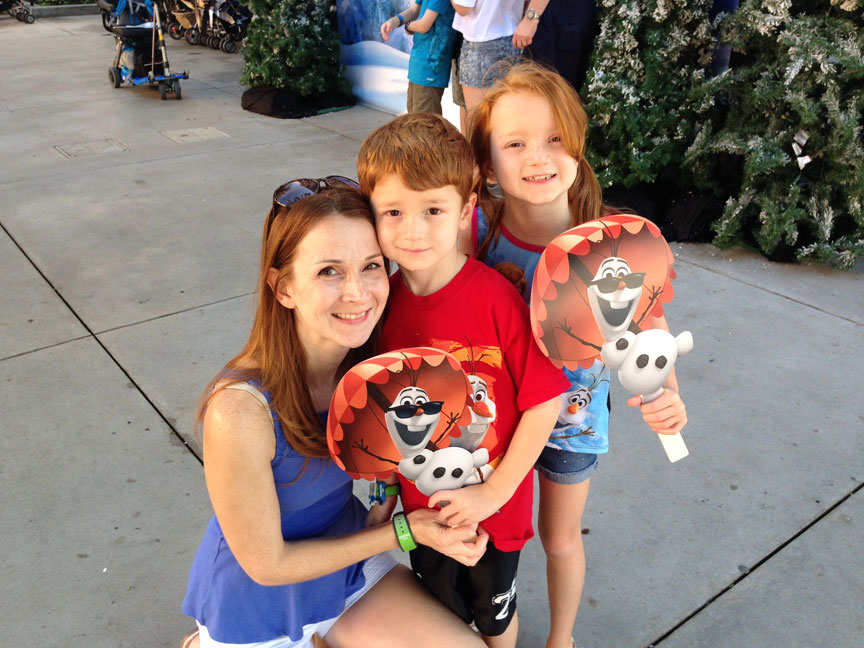 My family and I recently had the opportunity to visit Hollywood Studios during the Frozen Summer events and we had a great time! We were able to experience both the premium package and a day on our own. These are our observations:

Obtaining Tickets For the First Time in Forever: A Frozen Musical Celebration:

With Premium: We checked in for the Premium Package near Min & Bill’s Dockside Diner around 9:45am. During the check in process we were able to choose tickets to any of the sing-along shows we wanted. We chose to attend one of the later shows and take the afternoon away from the crowds and heat. It was really nice not to have to stress about the possibility of not getting tickets or have to run to the back of the park to get them. We signed up for Jedi Training in the time we would have spent getting tickets.

Without Premium: Tickets to the Frozen sing-along are available on a first-come, first-served basis on the Streets of America. We went shortly after park opening and were given our choice of shows throughout the day. We decided to try an earlier show this time, and asked for tickets to the 1:30 sing-along. There was no line for the tickets, and the whole process was a breeze!

With Premium: Upon returning to our original check-in point near Min & Bill’s at 10:30am, we were escorted to a large area that was to the left of the Sorcerer’s Hat. There was plenty of room to stand and walk around with a special area in the front sectioned off for children and 1 parent. We were also able to get as many Mickey Bars, Frozen Lemonades, Bottled Waters and Sodas as we wanted! I sat with the kids towards the back of the sectioned area and still had a good view. However, some of the guests at the rope decided to stand up and block the view for everyone else. If you do get the premium package, I recommend either getting to the front of the rope or asking a Cast Member to enforce the seating arrangement. We basically missed the entire procession, but could still see what was going on at the stage. I did notice that once the official welcome is finished, Anna and Elsa exit to the left and the entire procession heads down past American Idol near Jedi Training. I hurried over to the left side of the stage and had a perfect view of Anna and Elsa leaving in their sleigh! 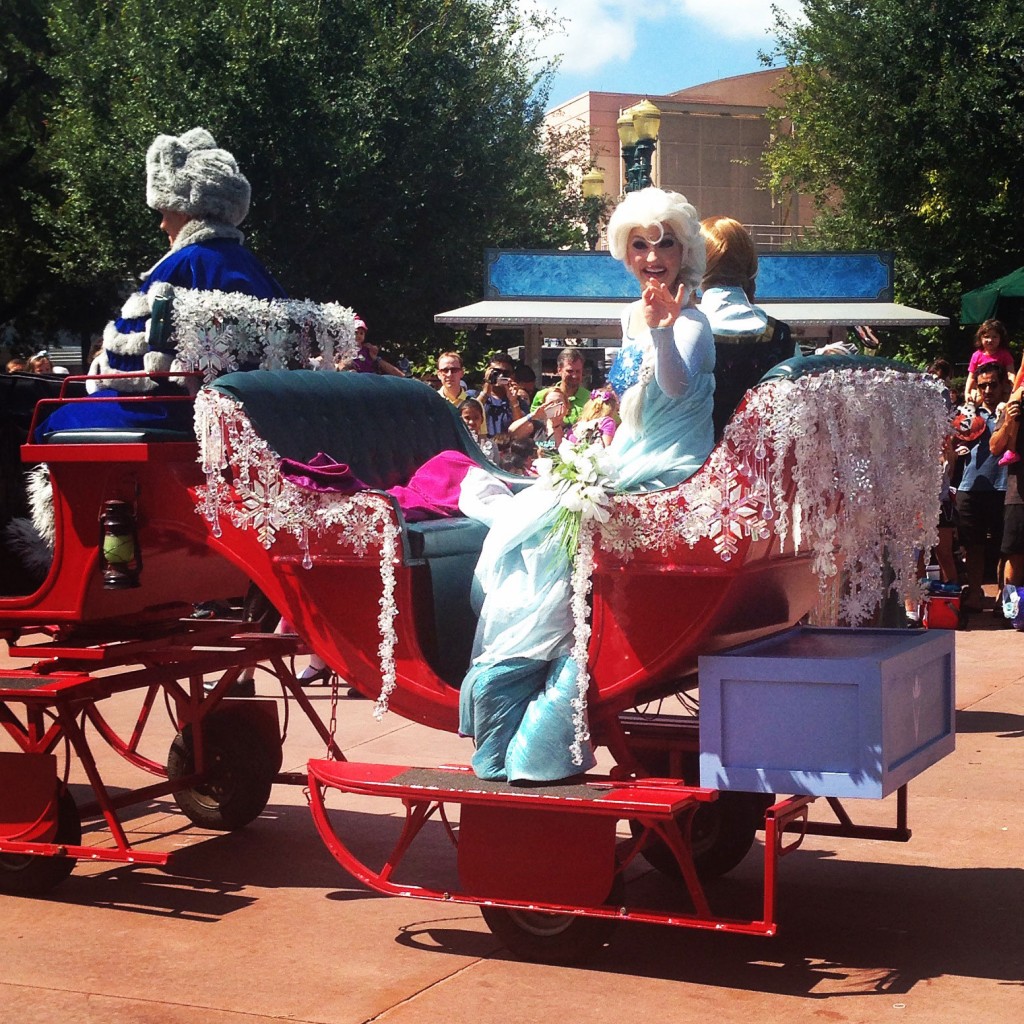 Without Premium: About 30 minutes before the Welcome Procession we headed to Hollywood Boulevard to secure our spot. Nearly all of the viewing areas close to the Sorcerer’s Hat stage were taken, but we did find a lot of places to stand on the right side of the street. However, all of these spaces were in the sun, so I decided to stake out a spot near guest relations, right where the procession would begin. You can’t see the stage from there, but even up to 15 minutes before the procession there were still a few good places to stand. Once it began, we had a great view. If you’re concerned about missing the short exchange that happens onstage after the procession, just follow right behind the parade as they walk up Hollywood Boulevard and you won’t even have to fight the crowds!

Here is a video clip from our view of the procession without the Premium Package:

For the First Time in Forever: A Frozen Musical Celebration Experience:

With Premium: We arrived at the Premium Package line about 10 minutes before show time and were immediately escorted into the theater. The first three or four rows are reserved just for package guests, so we had amazing seats right in the center of the third row. There was no wait to get in and we loved our seats.

Our view of the Sing-Along with the Premium Package:

Without Premium:
Upon arriving 30 minutes before the show the entire setup of where exactly to go is very confusing. There were three different lines and it wasn’t immediately clear which one to use. When we did figure out where we were supposed to line up, it was very crowded and extremely slow-moving. We went through a few switchbacks and finally made it into the theater a little after 1:30pm. They had not started the show, but waited until everyone with a ticket was in and seated. We were sent up to the very top of the bleachers in the back. Although we were far away, we had a great view of the entire stage. The kids really loved the sing-along but were a little disappointed that Elsa’s ‘snow’ didn’t reach up to where we were sitting.

Our view of the Sing-Along without the Premium Package:

Frozen Fireworks Dessert Party (Premium): The dessert party was definitely the highlight of the entire day. We entered at the same location as we had earlier that morning; only the reserved area was larger and went all the way up to the Sorcerer’s Hat stage. Tables were placed around the area for guests to grab some yummy treats and enjoy the live music. The selection was really large and included some wonderfully themed treats such as Anna and Elsa mini cupcakes, Olaf on a stick, glittery key lime tarts and a selection of fun drinks like Troll Juice. I was pleasantly surprised to see two themed alcoholic beverages included as well. Other options included more ice cream bars, sodas, bottled waters, and what would a Frozen themed party be without chocolate fondue? It was wonderful to have room to walk around and enjoy the drinks and desserts without worrying about losing your spot for the fireworks. Room to move around really saved the night for us. My kids normally go to bed early, and if we’d had to stay put until 9:45 they never would have made it. Many people also really enjoyed the dance party (I was not one of them), to which we had a front row seat. We had a nice view of the fireworks, but I think it would have been better a little further back from the stage area. All things considered, the dessert party was awesome and really finished the entire day with a bang (no pun intended).

Video Clip of the Dessert Party, Fireworks and Snow on Hollywood Boulevard:

“Coolest Summer Ever” Dance Party and Fireworks (Without Premium): The dance party runs each day from 5:30 to 9:30 and is unfortunately, unavoidable. The Ice Men of the North (or a re-themed Mulch, Sweat & Shears) were incredibly loud and obnoxious. I’m really surprised that an event that is mostly frequented by families with young kids (it IS an animated movie with princesses after all), would subject them to such loud music for 4 hours straight. I also feel that 9:45pm is WAY too late to expect kids to stay up for fireworks. When we had the premium package they were able to stay awake only because they could walk around and enjoy desserts. This particular night was very different. My kids and I were able to get a really good spot near the tip board in the middle of Hollywood Boulevard about an hour before the fireworks were to start. By 9:15, the kids were a mess. It was hot, very crowded and extremely loud. People kept piling in around us and we could barely move. There was no way we were going to be able to stay for the fireworks. Although it was really disappointing to leave without seeing them, we just couldn’t stay. If you have young kids who are used to going to bed early, I would suggest getting a good viewing spot at least an hour before and then have someone you’re with take the kids into the shops, get them a snack, take a walk, etc. Also, keep in mind that the days we came to see Frozen Summer Fun were two busy days in August. If you’re coming in September, you’ll definitely see lighter crowds than we did.

My best advice for visiting Wandering Oaken’s Trading Post and Frozen Funland is: Get there early! We visited both first thing in the morning and late in the day and the crowds were much higher the later it became. The Trading Post is filled with a huge selection of Frozen merchandise. If you’re still on the hunt for an Elsa dress this is the perfect place to get it! I was also able to snag one of the Limited Edition Olaf Magic Bands while we were here! Playing in the snow and ice-skating at Frozen Funland was amazing. The kids had so much fun and it’s a great way to get out of the heat for a while. At first when I heard about this, I was worried that we would be cold and even considered bringing some snow gear down from New York. We absolutely didn’t need it. It felt great to get out of the hot sun and into the cold. The highlight of Frozen Funland was definitely the professional ice skaters. Throughout the day they enter the ice and perform a short, comical routine that is just incredible!

So, the big question: Is the Premium Package worth the price?
The short answer: YES.

When I think about what we enjoyed for the money we spent and compare it to prices for the other dessert parties available, I definitely think it was worth it. That being said, with some planning, you can absolutely have an amazing time at Frozen Summer without the premium package. Just be sure to plan ahead, get there early, and let your kids take a break from the noise and crowds with one parent while the other gets a spot for the fireworks. Either way, you should absolutely experience Frozen Summer Fun while it’s still around. You’re sure to have a wonderful time with or without the Premium Package! 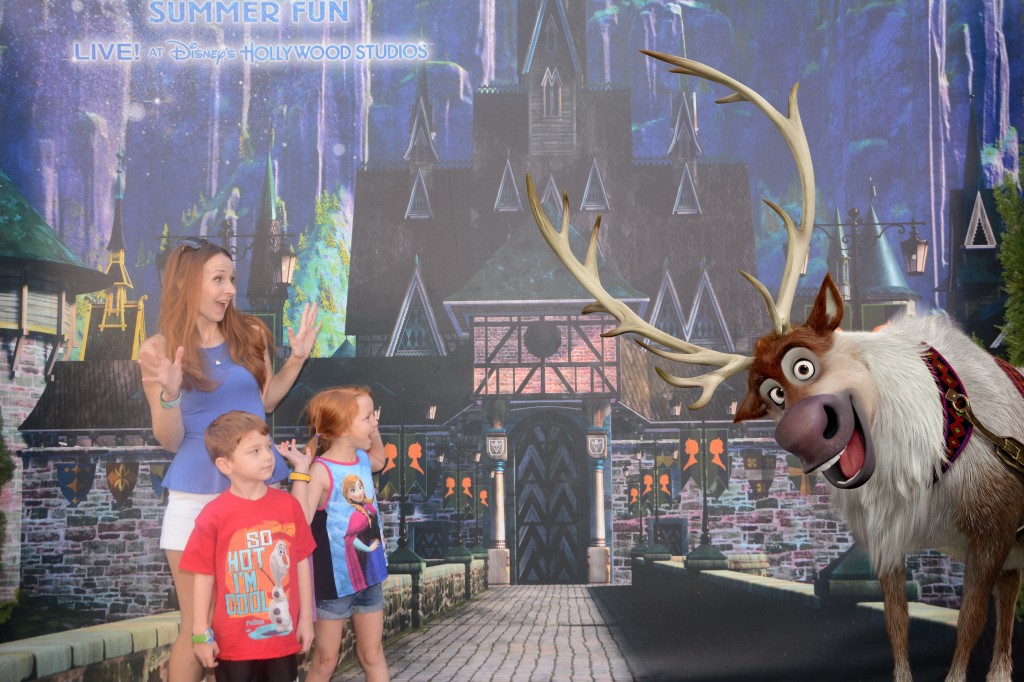 If you’d like to book the Frozen Summer Premium Package on select dates in September (August is currently sold out) call (407) 939-1939.